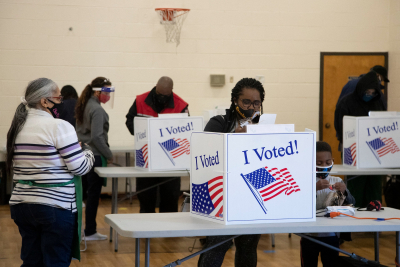 After more than two days of vote counting, Donald Trump’s early lead in Pennsylvania’s vote count has vanished. Democrat Joe Biden leads by just over 5,000 votes in the key battleground state, which has 20 electoral votes.

Almost 6.6 million votes have been counted in Pennsylvania and the count continues as localities continue to verify and count mail-in and provisional ballots.

Biden earlier Friday had taken the lead in Georgia, which has 16 electoral votes.

If Biden winds up winning both Pennsylvania and Georgia, it would be mathematically impossible for Trump to reach the 270 electoral vote threshold needed for victory.

Pennsylvania was among the most hotly contested states of the cycle, with both Biden and Trump making regular trips to the state for most of the campaign.

Both candidates spent considerable time there in the final days of the race. Biden held a final rally in Pittsburgh the night before the election and made an additional two stops on Election Day.

Meanwhile Biden spent Thursday trying to ease tensions and project a more traditional image of presidential leadership. After participating in a coronavirus briefing, he declared that "each ballot must be counted."

"I ask everyone to stay calm. The process is working,"Biden said. "It is the will of the voters. No one, not anyone else who chooses the president of the United States of America."

Trump showed no sign of giving up and was was back on Twitter around 2:30 a.m. Friday, insisting the "U.S. Supreme Court should decide!"

Trump’s erroneous claims about the integrity of the election challenged Republicans now faced with the choice of whether to break with a president who, though his grip on his office grew tenuous, commanded sky-high approval ratings from rank-and-file members of the GOP. That was especially true for those who are eyeing presidential runs of their own in 2024.

Tweet
More in this category: « Murder ruled out in learner Keamogetswe Seboko’s death. US Elections Live Updates:US state of Georgia says will recount razor-thin vote. »
back to top