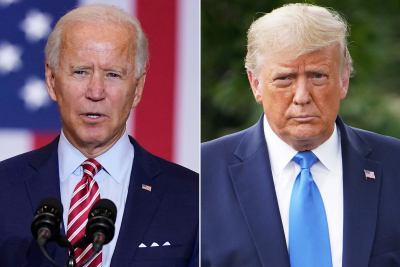 Georgia Secretary of State Brad Raffensperger said on Friday that "there will be a recount in Georgia" after vote totals show a razor-thin margin between President Trump and Democratic nominee Joe Biden in the battleground state.

Raffensperger said the state -- which has 16 electoral votes and would give Biden the boost he needs to surpass 270 and clear the path to the White House -- is "too close to call."

Gabriel Sterling, the voting system implementation manager for Raffensperger, added that the small number of votes is comparable to "a margin of less than a large high school" and emphasized that candidates can only request a recount until after the election is certified and if the results are within 0.5% of each other.

Officials said they expect to know the result by the end of November.

As of Friday, Georgia had reported 99% of the votes have been counted and Biden overtook Trump for the lead by a mere 1,098 votes.

Sterling said 4,169 ballots are still left to be counted -- that number nearly half of what it was just two hours before.

In Cherokee County, 150 ballots need to be rescanned and uploaded into the system. In Cobb County, 75 ballots remain, in Floyd, there are 444, and in Gwinnett County, there are approximately 3,500 left.

Raffensperger also added that there are 8,890 outstanding military ballots in Georgia, and if they are received by the end of today, they will also be counted in this election.

Trump's camp continues to wage war in some of the battleground states that are continuing to count votes,filing lawsuits challenging the count in Georgia, North Carolina, Pennsylvania, and Nevada.

The Georgia suit, which hinged on a poll worker claiming he saw 53 late ballots illegally compiled with a group of eligible ballots, was tossed out by a Chatham County judge on Thursday.

"We will not let those debates distract us from our work. We will get it right," Raffensperger said, speaking at a press conference in Atlanta.

Sterling said that in Georgia, he is "not aware of any" instances where poll watchers have challenged the votes being counted.

"The final tally in Georgia at this point has huge implications for the entire country," Raffensperger said.

"In Georgia, this process is and will remain open and transparent to monitors."

Tweet
More in this category: « US Elections Live Updates:Biden takes lead in Pennsylvania. South Africans urged to report illegal persons to authorities. »
back to top