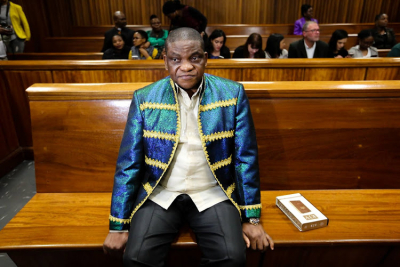 Rape and human trafficking accused Timothy Omotoso has lost his application for leave to appeal a decision by a Port Elizabeth High Court judge not to grant him bail.

Passing down judgment this morning, judge Phillip Zilwa said there were no reasonable prospects another court would come to a different conclusion.

Zilwa said he considered all the old and new facts of the bail application, and the reasons he denied bail still stand.

He is of the view that there is no prospect of success in another court.

It is the third time Omotoso has failed to secure bail after previously attempting and failing twice in the Port Elizabeth magistrate's court.

Omotoso has been in custody since his April 2017 arrest, while Sulani and Sitho are out on R2,000 bail each.

Their main trial is expected to resume after trial judge Irma Schoeman has made rulings on two separate applications: one by the state to make amendments to the indictment and the other by the defence to scratch the evidence of two state witnesses from the record who had previously testified.

Tweet
More in this category: « By-elections off to good start in all 9 provinces. Livestream:ANC briefs media on latest developments within the party. »
back to top