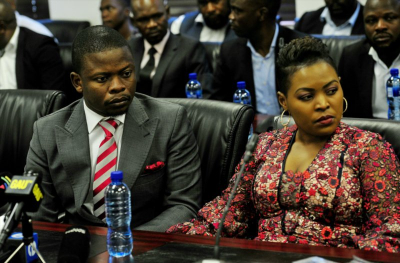 The Malawian government has issued a statement, expressing concern about the treatment President Lazarus Chakwera received when leaving the country.

Chakwera's presidential envoy was subjected to additional security checks and searches which the statement called improper and incongruous with the treatment they received when entering the country.

"The government of Malawi is aware and grateful that a public statement was recently issued by the South African government, exculpating President Chakwera from false allegations dominating the South African media that his presidential plane was used as a conduit for trafficking two Malawians [Shepherd and Mary Bushiri] wanted by South African authorities," the statement read.

It went on to say the response from the South African government fell short of acknowledging the poor treatment received by Chakwera.

The Malawian president was on an official visit in South Africa.

Meanwhile the South African government has initiated an extradition process in an effort to retrieve two fugitives, who last week unlawfully left the country for Malawi while facing a criminal trial.

In a statement issued on Sunday, the Government Communication and Information System (GCIS) confirmed that the fugitive couple, Shepherd Bushiri and Mary Bushiri, his wife, did not leave South Africa aboard a flight on which Malawian President, Dr Lazarus Chakwera, and his delegation travelled.

Chakwera undertook a working visit to South Africa on Friday, 13 November 2020, during which South Africa and Malawi discussed a broad range of initiatives to strengthen relations between the governments and people of the two countries.

The GCIS said following the visit, Chakwera and his delegation departed from Waterkloof Air Force Base in Tshwane and stopped over at OR Tambo International Airport to collect an additional number of officials who had travelled to South Africa earlier to prepare for the working visit.

"Department of Home Affairs immigration officials verified the identities of all passengers, and Mr and Ms Bushiri were not on the flight.

"When travellers are processed for departure, they are required to present themselves to an immigration officer who, among other checks, verifies that the passport belongs to the traveller,"said the GCIS.

While the extradition process is underway, law-enforcement agencies will continue investigations into this matter.

The Independent Police Investigative Directorate (IPID) has also confirmed that Bushiri and his wife in 2018 opened a case of extortion by police corruption/cash extortion. The case was opened by Bushiri’s lawyer on their behalf in Sunnyside, Pretoria.

"It is alleged that the police officers investigating several allegations of rape against Mr Bushiri were trying to extort money from Bushiri so that they make his rape charges disappear,” said IPID in a statement. “Bushiri, through his lawyer reported the alleged police corruption to IPID, as part of the investigation process, IPID required Bushiri to provide crucial information about the allegations and to acquire witness statements but Mr Bushiri’s non availability due to his busy schedule has been giving IPID Investigators a challenge to proceed with this case."

"Mr Bushiri has been provided with feedback on the matter, he is well aware that the Investigator will proceed with his case as soon as he co-operates fully with investigation process,"reads the statement.

Tweet
More in this category: « Livestream: State Capture Commission hears application for the recusal of the Chairperson. Ramaphosa says SA remains an attractive investment destination. »
back to top