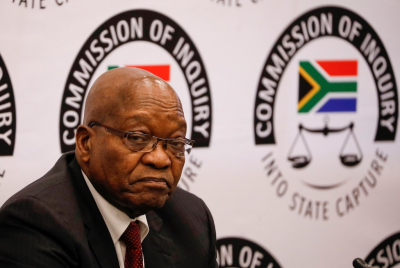 Deputy Chief Justice Raymond Zondo has again delayed his decision on whether he will remain as chairperson of the state capture inquiry.

Zondo, who was meant to hand down his decision on Wednesday, has postponed his ruling twice as he was still studying documents.

The latest delay,the commission said in a statement, was because of former president Jacob Zuma's response to the opening statement made by Zondo at the hearings on Monday.

The commission said Zuma furnished it with a statement which Zondo "needs to consider". Zondo was scheduled to rule on the recusal application at 3pm on Wednesday.

Zuma made the formal application this week, arguing that Zondo had, through the commission, lined up hostile witnesses to testify against him since the commission started its work two years ago.

In his application, Zuma argued that they had used the commission to peddle "lies" that he was responsible for state capture.

His application for Zondo to recuse himself came after an exchange between the commission’s secretary, Itumeleng Mosala, and Zuma’s attorney Eric Mabuza.

Mosala, in a letter, cautioned Mabuza to advise whether Zuma would adhere to the summons issued to him at Nkandla on 22 October, calling for him to appear before the commission on Monday 16 November.

Mabuza criticised the tone of the letter and accused the commission of "bullying" the former president.

Zuma would not have been able to attend Wednesday’s recusal, as he had a funeral to attend, the commission heard on Monday.

Updates to follow as more information is made available.