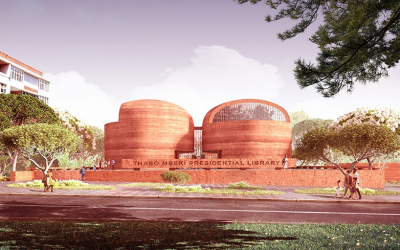 Adjaye Associates,the eponymous practice of RIBA Gold Medal-winning Ghanaian–British architect Sir David Adjaye, has unveiled its design for the Thabo Mbeki Presidential Library, a rammed earth structure with granary influences set to include a museum, research center, and more in honor of the second post-apartheid President of South Africa.

Born in 1942, Thabo Mbeki served as president from 1999 until his resignation in September 2008, nine months before the conclusion of his second term.

Described by the firm, which maintains offices in New York City, London, and the Ghanaian capital of Accra, as "a space of excellence, learning, research, discourse and cultural exchange predicated on the African perspective," the presidential library is planned for Riviera, a suburb of Johannesburg. Flanked by a public plaza, the interconnected cylindrical forms—eight in total—that top the long, tilted base of the building are meant to evoke grain storage structures in a metaphorical nod to the library’s function as a place to seek "knowledge-based nourishment."

Spread out across just over 52,000 square feet, the library will serve up quite the feast. In addition to the aforementioned museum and research center, the facility will also house an exhibition space, a women’s empowerment center, auditorium, cafe, seminar facilities, administrative offices, "digital experience space," reading rooms, and an archival hub that will hold artifacts and key documents of Mbeki as well as other significant African historical figures.

The Thabo Mbeki Centre presents an opportunity to realize the ambition of the dreams of President Thabo Mbeki to advance and empower an African renaissance," said Adjaye in a statement. "The architecture of the Library taps into the collective memory of the continent through the establishment of a new historical centre for African consciousness in which knowledge, education and sustenance are nurtured in the representation and intelligence of the continent.

Tweet
More in this category: « Malawi court orders the immediate release of the Bushiri's. COVID-19 Daily Update:New cases recorded in the last 24 hours remain below 3 000 mark. »
back to top