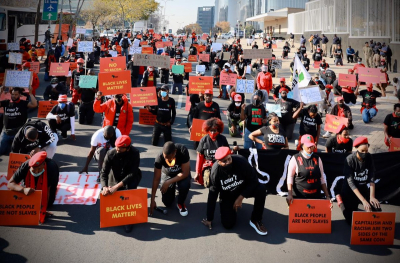 The Western Cape High Court has dismissed the Brackenfell High School’s application for an interdict against the EFF protesting outside the school’s grounds.

The application was brought by the school governing body (SGB) last month.

Brackenfell High School had argued before the court that the Economic Freedom Fighters (EFF) had a "history of violence", while the party hit back, saying the school was not treating racism as seriously as it should be.

This was following multiple protests near the school’s premises that ended in violence. The school approached the courts after the EFF had threatened to continue with their action.

The protests came after an alleged private event, held by the school’s parents, hosted only white students, and allegedly did not invite black students.

Advocate Dali Mpofu, for the EFF, said while children should be protected, it must be from "imbibing racism", not, "cocooning them from stun grenades".

He pointed out that it was common cause that the EFF had twice in November protested peacefully against racism, the second time coming under attack by "racism hooligans and vigilantes".

And while the school, in a communique the day after the violence, described the attack on the party members as "disgraceful", Mpofu pointed out that it had that very day approached the Western Cape High Court, "to interdict the victims".

"It’s a typical South African reaction," Mpofu said, slamming what he called the "audacity" of the application. He argued it should be dismissed as it was "frivolous".

"Racism is violence. It’s the worst form of violence. It can’t be perpetrated without violence or the threat thereof."

But according to advocate Marius Verster, for the school, the EFF had a history of violence, commenting that they even had “the word fighter in their name”.

Judge Siraj Desai dismissed this as the introduction of an "irrelevant factor".

Desai there was no direct evidence that showed that black pupils had actually been invited to the party. He said the school had not employed a black teacher in 26 years and it had failed to "furnish any cogent explanation as to why it remains so unrepresentative of the racial demographics of society".

Judge Desai said the school had not convinced him to grant the interdict.

Meanwhile an investigation by the Western Cape Education Department found no evidence of racism at the school.