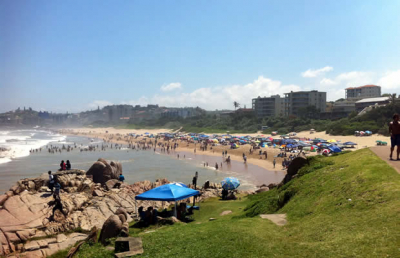 Four men have been arrested after they allegedly assaulted lifeguards at Manaba beach on the KwaZulu-Natal South Coast.

The assault was captured on video and has been widely shared on social media.

The suspects are reportedly Gauteng holidaymakers.

Police spokesperson Captain Nqobile Gwala said a case of assault with intent to cause grievous bodily harm was being investigated by Margate SAPS.

"It is alleged [on Wednesday] at 2.24pm, at Manaba Beach, a group of suspects assaulted the lifeguards who were on duty. Four sustained injuries and one was seriously injured and taken to hospital for medical attention," said Gwala.

"Four suspects between the ages of 21 to 52 were placed under arrest."

Looks like these folks are having a very merry Christmas.

Ray Nkonyeni municipality spokesperson Simon April told Timeslive on Thursday that the brawl apparently started after a group of men refused to listen to the lifeguards.

"It started off as a scuffle when the lifeguards tried to warn the group about how far they could swim. Things got heated and unfortunately it became a physical fight on racial grounds.

"There were punches and kicks and lots of racial abuse and swearing, all because it seems that the lifeguards were trying to do their job and enforce the rules, "April said.

It is alleged that the fight broke out after the beachgoers were in disagreement with the lifeguards who were enforcing rules over how far they could swim.