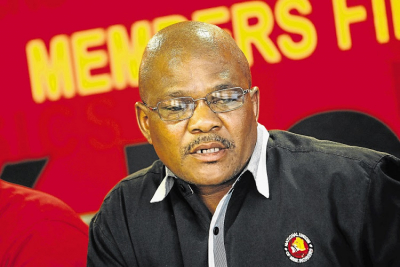 The General Secretary of the National Union of Mineworkers (NUM), David Kolekile Sipunzi, has passed away.

The union confirmed the news in a press statement on Friday.

"The family of comrade David Kolekile Sipunzi confirmed that he passed on at 11 am this morning, "says NUM Deputy General Secretary, William Mabapa.

The cause of death is still unknown and Mabapa says more details will be communicated soon by the family.

NUM has learnt with deep sadness and shock the news of the death of its General Secretary comrade David Kolekile Sipunzi. He passed away today at 11 am this morning. The cause of death is still unknown. More details will be communicated soon by the family.

Mabapa says Sipunzi will be remembered for his forthrightness, commitment and dedication in championing the cause of the working class to ensure, protect and safeguard their jobs and conditions of employment.

"He was a trade unionist who did not cease to fight for the rights of the NUM members. His global contribution as one of the Vice Presidents of the World Federation of Trade Unions (WFTU) and his efforts in labour rights will not easily be forgotten."

Meanwhile COSATU described Sipunzi as a larger-than-life figure who made an invaluable contribution to the labour sector.

Cosatu's spokesperson Sizwe Pamla said Sipunzi managed to stabilise NUM even under difficult circumstances."It's a big loss for the federation, the NUM, and workers in general because his contribution went beyond the state of the mining sector as he was interested in really representing workers across the economic sectors,"Pamla said.

In reaction, the Police and Prisons Civil Rights Union (Popcru) on Friday said it had learned with shock of Sipunzi’s passing.

"Popcru sends its deepest condolences to the Sipunzi family and to the NUM membership," the union said in a statement.