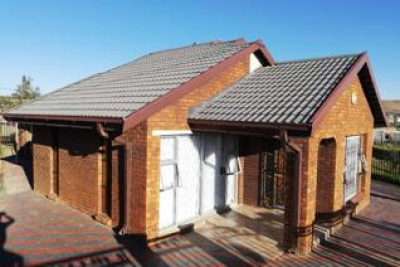 Fullview investigation has uncovered an alleged property fraud syndicate operating in Bethlehem, Free State, where unsuspecting would-be buyers have been duped into purchasing houses which are for sale, losing hundreds of thousands of rand's in the process.

The alleged syndicate involves people who pose as estate agents and property sellers.

Bethlehem residents, whose identity has been withheld to protect them, told how they used their pension money in order to buy properties.

One of the houses was on the market for R445 000, an amount the complainant has been paid in cash as opposed to taking a home loan over 20 or more years.

However, she said she was now left with no property.

An agent who took her to view the property had allegedly claimed he was doing the transaction with the relative of the would-be buyer.

One of the buyer of the property, has brought the following concerns to our attention:

1. On the 27 January 2020 an OFFER TO PURCHASE AGREEMENT was concluded between myself and BLUE KEY PROPERTY BROKERS.

2. On the same day an amount of R445 00.00 was paid into the BLUE KEY PROPERTY BROKERS FNB Account No 62195696889 as per the advice of its agent KS MOFOKENG stating their interest rates are better than that of the CONVEYANCERS.

3.It should be noted that before the AGREEMENT in 1. above was concluded the agent requested an amount of R35 000.00 be paid to him as a commission which was done as follows :

4. Transfer costs amounting to R15 532.00 were paid to the TRUST ACCOUNT of CONVEYANCERS.

5. The property was promised to be handed over by March 2020 in vain with the COVID-19 pandemic as an excuse.

6. Transfer Documents were only sent to me in September 2020 for a signature.

7. Only in October 2020 was I informed by the CONVEYANCERS that everything is ready to be processed further, except awaiting payment from BLUE KEY PROPERTY.

8. BLUE KEY PROPERTY BROKERS then promised to effect transfer payment on the 9th of October 2020 in vain to date.

10. It is clear that the property cannot be secured or handed over without this transfer payment, which only happens by word of mouth only and postponed every day since the 9th October 2020.

11. One wonders what happened to the money which seems so hard to direct it forward hence backward is the only option under the circumstances.

However, our investigation revealed that the owner of Blue Key Property Brokers, PW Viljoen, has been promising to refund the would-be buyers after accepting the cancellation letters but to no avail, He is always having excuses instead of resolving the matter.

According to the would-be buyer's bank statement, an amount of R445 000 was transferred on the 27 of January 2020,the same day the seller signed the contract, another resident known to Fullview transferred, R500 000 and other made a transfer of R205 000.

Fullview engaged with the owner of Blue Key Property Brokers, He acknowledged the transactions and promised to resolve the matter but to date nothing has been done and would-be buyers are send from pillar to post.

Names of account holders and of the buyer have been withheld as they are witnesses in a fraud case under investigation by the South African Police Service (SAPS).

How the racket works:

The syndicate identifies a house which is legitimately on the market in the area.

One of the syndicate members poses as an estate agent and takes an unsuspecting buyer for viewing.

The "estate agent" takes the buyer to their lawyer to sign a sale agreement.

The buyer is urged to pay the lawyer in cash for consultation and initiation of the transaction.

The money is immediately transferred to various accounts.

Twitter
More in this category: « Liquor traders pleads with government not to impose total booze ban. Niger heads to polls in search of first democratic transition. »
back to top