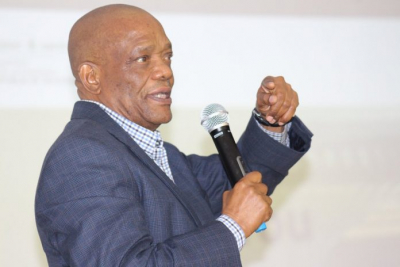 North West Premier, Professor Job Mokgoro, has encouraged communities to adhere to level 3 regulations so as to alleviate pressure on healthcare workers.

While chairing the virtual Provincial Command Council meeting on Tuesday evening, the Premier said people should stay at home, respect all health protocols and observe the rules of the road when travelling during this holiday period.

The Command Council expressed concern about the non-adherence to health protocols, particularly at various post offices where COVID-19 social relief of distress grants are collected.

As a result, the council directed law enforcement and compliance officers to closely monitor these areas during this period, and enforce compliance.

Law enforcement was also directed to monitor social gatherings that are prohibited under level 3, community behavior and adherence to the regulations, including the number of people attending funerals and adherence to curfew hours.

"With the number of hospital cases steadily increasing in Bojanala Platinum District, which is now a hotspot, the Command Council received a report on the Department of Health’s state of readiness to respond to the surge, including the continuous monitoring of hospitals' capacity to admit patients,” the North West provincial government said on Wednesday."

The meeting welcomed the cancellation of year-end events that were planned by the Department of Arts, Culture, Sports and Recreation in response to the restrictions imposed on all social gatherings during the adjusted alert level 3.

The provision of additional food parcels has been arranged for distribution, where needed, across the four districts of the province.