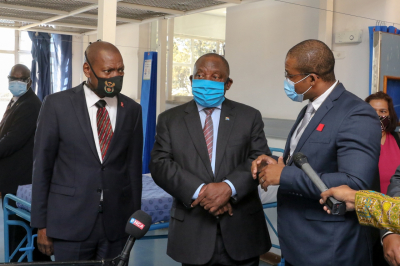 Speaking in an interview with the SABC, the president said that the National Coronavirus Command Council (NCCC) met earlier this week, with further provincial meetings now scheduled on Sunday.

"Cabinet will also look at some of the recommendations coming from our natjoints and health department. It is then that we will be able to make an announcement to the nation," he said.

Ramaphosa said that government was concerned about the continuing spike in infections.

"In the initial stages of the virus, we locked down the country to prepare our health systems. Our health system is robust and it did withstand the infections then. But now this is now the second wave and we have a different variant."

To arrest the spread of the virus, Ramaphosa said that South Africans should keep up with protective measures such as wearing a mask, washing their hands and continuing with social distancing.

In the NCCC meeting on Wednesday, officials called for stricter measures to curb soaring coronavirus infections at a meeting to discuss the state’s response to the pandemic.

Cooperative Governance Minister Nkosazana Dlamini-Zuma and Police Minister Bheki Cele have recommended the country move to virus alert level 4 for 30 days, two people familiar with the matter said. They asked not to be identified as no decision has been taken.

Other officials concerned about the impact harsher restrictions might have on the economy called for the relaxation of measures including the ban on alcohol sales and the closing of the nation’s beaches, the sources said.

The government announced on 28 December it was moving the country to virus alert level 3 from level 1, banning alcohol sales and extending a nationwide curfew to slow the spread of the pandemic.

On 28 December 2020, Ramaphosa announced that South Africa would move to an adjusted level 3 with immediate effect.

These include a stricter curfew time, a ban on the country’s beaches, as well as a prohibition on the sale of alcohol.

Under level 4 restrictions that were in place in May, travel between provinces was banned, with the exception of transporting goods, and borders remained closed to international travel, "except for the repatriation of South African nationals and foreign citizens."