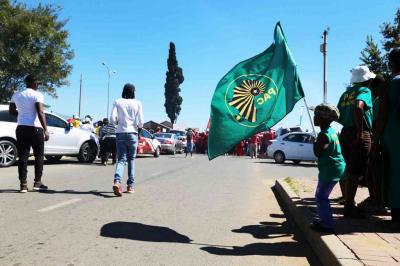 He was 80. Mlambo died in a Johannesburg hospital to which he was admitted on Friday.

Funeral arrangements are yet to be announced.

Mlambo was born in Johannesburg on 22 February 1940.

He did his secondary school education at Kilnerton. After completing his studies, he worked at Pretoria Pottery Cement in Jupiter in 1958 until his return to Kilnerton in 1962.

Inspired by Josiah Madzunya and Robert Sobukwe’s propagation of Pan Africansit ideas, he joined the Pan Africanist Congress (PAC) at its formation in 1959.

He was appointed as the party branch leader in Daveyton Township near Benoni. Two years after the banning of the PAC, Mlambo went to the PAC’s underground headquarters in Maseru late in 1962. Together with other members of the party, he received instructions to prepare for the "Year of Destiny" – 1963.

However, on 31 March 1963, Mlambo was arrested alongside seven other members of the PAC. These were Abel Chiloane, Simon Nkosi, Josiah Makofane, Nelson Nkumane, Michael Muendane, Lucas Mahlangu and Douglas Simelane.

Mlambo was listed as accused number one in their trial. He was charged with sabotage and plotting to overthrow the South African government. Subsequently, he was sentenced to 20 years in prison. After being convicted, he was transported to Pretoria Prison where he was joined by other PAC political prisoners.

Together with others, Mlambo was then transported at the back of a truck en route to Robben Island. The truck stopped at Colesberg Prison where they slept chained to one another.

He arrived on the Island on26June 1963 and was sent to the Old Jail where he, together with others was placed with common-law prisoners. His prison number was 277/63.

Towards his release, he was transferred from Robben Island to Leeukop prison on 6 May 1983 and eventually released on 20 June 1983. Mlambo spent about ten days with his with family before skipping the country to join PAC in exile. He was appointed to the position of Secretary for Foreign Affairs for the party and occupied the position until he was elected Chairman and Commander in Chief of APLA at an extraordinary session of the Central Committee on 12 August 1985.

Between 22 September and 4 October 1985 he led a party delegation to China after which he attended a UN conference in Paris before going to Belgrade on party business.

In April 1986 Mlambo also headed a PAC delegation that met the Group of Eminent Persons from the Commonwealth Secretariat in Dar-es-Salaam. During the deliberations Mlambo tabled the PAC’s position and conditions for the party to consider a negotiated settlement in South Africa.

In 1990, after the unbanning of the liberation movements, Mlambo was elected PAC deputy president. He attended the Summit of the Heads of State and Government of the Frontline States and the Representatives of the Liberation Movements as the PAC’s representative in Harare in December 1992. He served as Deputy President until 1994 and after that as a member of the PAC’s National Executive Committee.