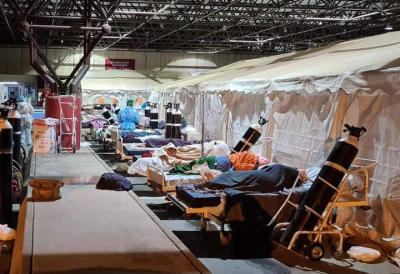 Gauteng premier David Makhura says that the return of holidaymakers from the December festive season has led to a sharp increase in Covid-19 cases in the province.

In a media briefing on Monday (11 January), the premier said that Tshwane metropolitan and surrounding areas are now seeing the highest rate of daily infections.

"Tshwane hotspot as a region and as a metro is the centre of (Covid-19) at the moment." In addition to the return of holidaymakers, Makhura said that the increase can also be attributed to matric rage events in December.

An analysis before Christmas found that the largest number of students who attended the rage matric events from Gauteng came from Tshwane, the premier said.

"We already saw that Tshwane was going to be the hardest hit, but we also saw unfortunate events in the run-up to Christmas. Events which were a flagrant violation of the regulations, " he said.

“With regards to the second wave, Tshwane Metro has the highest number of daily infections” #StaySafe pic.twitter.com/DkjqGpQxQ2

Makhura visited the Steve Biko Academic Hospital on Monday morning after the hospital reported significant pressure due to an increase in Covid-19 cases.

The Gauteng government said that some patients in these hospital are coming from private hospitals, while are others are being referred from outside provinces such as the North West, Mpumalanga and Limpopo.

The provincial government said that it will now erect two additional tents at the hospital to cope with the increasing pressure.

A total of 4,033 people are currently hospitalized in both public and private facilities.

The Johannesburg district has reported cases (133,792) and the most deaths to date (2,096). However, Tshwane’s cases are steadily increasing and the district has now reported a total 84,146 cases and 1,747 deaths.

Tweet
More in this category: « SASSA urges temporary grant recipients to appeal by providing referral reports. South Africans should brace for a possible lockdown extension - Experts. »
back to top