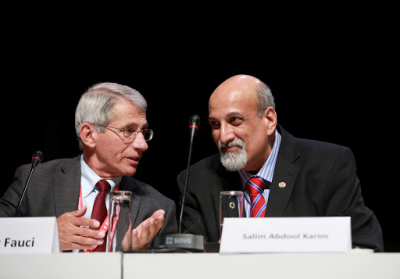 Prof Salim Abdool Karim, chairperson of the Covid-19 ministerial advisory committee said "I feel like I let my country down."

Speaking on SAfm on Tuesday, the professor said he should have joined other global scientists and helped create a Covid-19 vaccine that would have also benefited SA.

Abdool Karim said when the virus hit SA in 2019, he had had discussions with Prof Lynn Morris, who at the time was the  interim director of the National Institute for Communicable Diseases where he said he was willing to attempt to formulate a vaccine.

But Abdool Karim said he was deterred by a lack of facilities to create a vaccine in SA and the funds needed.

"We should have joined the race," he said. "I should have been more forceful and raised the funds."

Abdool Karim was positive about the vaccine which is expected to arrive in SA soon.

He said careful planning was needed ahead of its distribution.

The professor advised that the vaccine should be first distributed to health workers, followed by the elderly, those with comorbidities and then essential workers.

He suggested that distributing the vaccine in this order would eliminate a lot of people who are now battling with the virus and this would therefore ease the burden on the health-care system.

"We could find ourselves in a better situation in 2022. That is doable," he added.

Another of Abdool Karim’s regrets was not joining the call for a standard international vaccine.

Meanwhile, he said, it was hard to say when SA would find itself out of the second wave or whether a third wave was on the cards.

"Looking at the earlier evidence, it looks like (this new variant of Covid-19) is not more severe at this stage but the evidence is quite strong that it’s spreading much faster," he said. "All of the parameters of how we understand viral dynamics are based on our first wave. We have some idea of how long it took to get us to peak and we know it takes about four or five weeks from peak to (decline) — but that’s all with the first wave which was a completely different dynamic," said Karim.

"We at this stage cannot tell for sure, based on what we know from the first wave, how the second wave is going to play out," he added.

South Africa's expected to begin the rollout of vaccines this month.

Twitter
More in this category: « Dlamini-Zuma published a new gazette which confirms changes to some restrictions. 7,000 South Africans arrested for not wearing masks - Bheki Cele. »
back to top