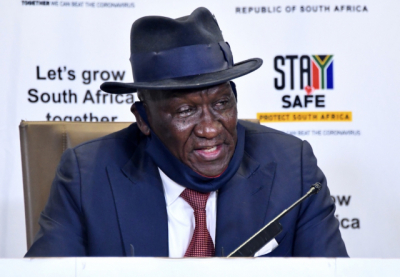 In an interview on Tuesday, Cele said that since 27 December, when the new regulations were introduced, a total of 20,600 lockdown-related arrests have been made in total.

He said that most of these arrests have been around the country’s current prohibition on the sale and transport of alcohol. Despite these higher numbers, Cele said that more South Africans seem to be wearing masks.

"We have found better compliance, maybe because people are realising that the situation is serious but also because we can now enforce the (failure) to wear a mask.

The police will arrest those people who break the law." He said that under the country’s current level 3 lockdown it is an offence not to wear a mask in public places.

Cele said when people are arrested for not wearing a mask, they are taken to a police station where they are formally charged, and have their fingerprints taken.

He added that this process will give South Africans a criminal record, something which they must be 'very wary of'.

The wearing of a face mask is mandatory for every person when in a public place. excluding a child under the age of six years. any person who fails to comply with a verbal instruction by an enforcement officer to wear a face mask, commits an offence and is, on conviction. liable to a fine and/or a period of imprisonment not exceeding six months.

In addition, no person will be allowed to perform the following activities if they are not wearing a mask:

Health Minister Zweli Mkhize said in a statement on Tuesday that 13 105 new cases have been identified since the last report bringing the cumulative total of Covid-19 cases identified in South Africa to 1 259 748.

Twitter
More in this category: « Prof Salim Abdool Karim says 'I feel I let my country down' in vaccine race. Update: Anoj Singh's testimony postponed at the State Capture Inquiry. »
back to top