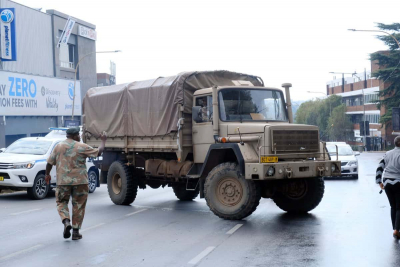 Ramaphosa sent a letter to Parliament’s portfolio committee on defence over the latest deployment.

It made the revelation after receiving a letter from President Cyril Ramaphosa dated January 8. "The letter informs parliament that the deployment will run from December 29 2020 to January 31 2021, at a cost of R95,666,944," said co-chair of the joint standing committee, Cyril Xaba.

"It is intended to preserve life, health and property in emergency or humanitarian relief operations in support of other government departments and in co-operation with the SA Police Service, to prevent crime and enforce restrictions under the adjusted level 3 lockdown regulations."

The president is compelled to inform parliament of any deployment of the SA National Defence Force (SANDF).

The letter revealed that 2,122 members have been deployed since December 29 in support of other government departments in the fight against Covid-19.

"These deployments have contributed greatly to the fight against Covid-19 and the preservation of life," said Xaba.

The portfolio committee said the deployed members join those already deployed on various other missions, namely:

The committee is expected to discuss the letter at its next meeting.

More in this category: « The BHF responds to findings of the Section 59 Preliminary Report Investigations. Man wins R60m Powerball after being dumped by girlfriend. »
back to top