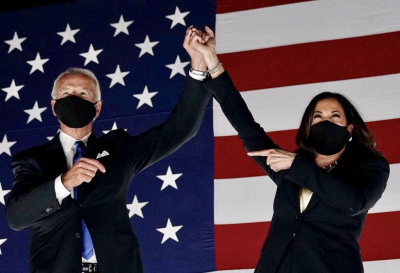 Joe Biden will be sworn on Wednesday as the 46th president of the United States, during a day steeped in tradition and ceremony that nonetheless has been altered due to the pandemic and tight security after the January 6 attack on the Capitol.

Biden and his wife Jill will spend Tuesday night in the lavish Blair House, located opposite the White House on Lafayette Square, that the US government uses to host special guests and visiting dignitaries.

On Wednesday morning Biden, a devout Catholic, will attend Mass at St Matthews church in Washington, and has invited Congressional leaders from both political parties.

Biden will then travel in a motorcade to the Capitol, the site of the January 6 riot by supporters of outgoing President Donald Trump, where the inauguration ceremony gets underway at 11 am (6 pm SA time).

He will be sworn in after Vice President-elect Kamala Harris takes her vow at noon (7 pm SA time), then will give his inaugural speech, during which he is expected to outline his vision to tackle America's multiple crises and his plan to "build back better."

The National Mall that runs from the Capitol to the Lincoln Memorial will be closed due to Covid-19 fears and because of tight security stemming from the January 6 attack.

Lady Gaga is due to sing the national anthem, while Jennifer Lopez is also set to give a musical performance.

As is custom, the newly inaugurated 46th US president will then dine with members of Congress in the Capitol building.

In the afternoon, Biden will head to Arlington National Cemetery just outside Washington to place a wreath on the Tomb of the Unknown Soldier, accompanied by former presidents Barack Obama, George W. Bush and Bill Clinton. Trump, who is shunning the day's events, will not be there.

From Arlington, Biden will travel by motorcade to the White House and is expected make the last part of the journey on foot and enter his new home surrounded by a military cordon.

Biden is due to sign his first executive orders shortly after arriving.