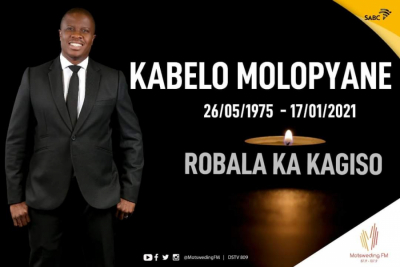 Motsweding FM presenter Kabelo KB Molopyane has been laid to rest in Mmabatho.

Molopyane has been with Motsweding FM at the time of his death and has presented all the weekday primetime shows that include standing in all the evening and night shows.

He also hosted other weekend major shows that include the Weekend Breakfast, Top 30, and Party-Time. To show his versatility he was also a Sports commentator for Soccer, Rugby, and Cricket.

His Radio career starts right back in 1996 when he joined Motsweding FM’s Drama Department as a drama artist before joining Soshanguve Community Radio station in 1997 and Mafisa FM in 2000.

Molopyane was a qualified teacher with a University Diploma in Education and also had a Degree in Communications with the University of North West.

The 45-year-old's contribution to radio, sport and the media industry as a whole has been applauded by many, with the SABC having stated that will be greatly missed.

The North West Arts, Culture and Recreation Department also paid its tribute to the family and friends of KB, stating that he played a vital role in promoting sports and the Setswana language in the province.

The provincial Arts Department highlighted that Molopyane was a bubbly and charismatic figure, on and off the airwaves, who touched many lives across the country.

"As we pay tribute to this gentle soul, we wish to register our thanks to him for the excellent role he played in advancing sport not only in the North West, but also [across] the length and breadth of the world wherever the Setswana language is spoken. On a number of occasions, he worked closely with the Department in advancing sport in the Province. One of his recent contributions was presenting the Annual Provincial Sport Awards in Klerksdorp" said the department.