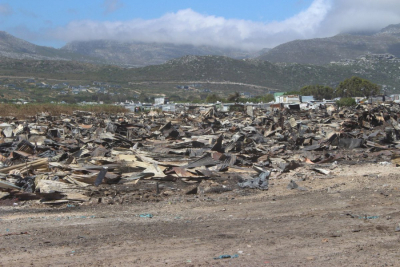 More than 6 000 residents of Masiphumelele and Taiwan informal settlements were left destitute after a blaze wrecked 1 000 structures in December 2020, forcing the area to be declared a disaster.

In a statement issued on Thursday, Simmers said that as at close of business on Tuesday, 176 units had been constructed.

"The construction of these structures commenced five days ago, which means that just over 35 units are being erected per day. This clearly shows that the City of Cape Town is on track to deliver the 1 100 structures by 22 February 2021, so that the affected residents can move back into their own shelter fairly soon," Simmers said.

Simmers commended the pace at which the units are being established since the city committed to deliver between 30 - 50 units per day.

"I am happy that the R32 million which we’ve made available for the erection of these emergency units is being used efficiently. These funds will also be used to erect a fence around the wetland, which is adjacent to the affected site, so that houses are not flooded during the winter rainy season," Simmers said.

The MEC however, pointed out that this is only a temporary shelter.

"In due course and once statutory processes have been concluded, we will commence with long term housing solutions for the most vulnerable and qualifying residents, by providing permanent shelter through the use of Sustainable Building Technology (SBT’s)," the MEC said.

He also noted that the erection of structures has also created employment opportunities to local residents, with 20 being employed.

"I would like to express my sincere gratitude to those community leaders and members who have been assisting us in ensuring that the process to deliver and erect these units is running smoothly.

"We will continue to collaborate with all relevant stakeholders, inclusive of the different spheres of government, sister departments, the private sector, organisations and the broader community to ensure that those affected by this fire are assisted," Simmers said.

More in this category: « Political party funding law will come into effect on April 1. NPC outline a plan to end 'downward spiral' – including a shake-up for schools. »
back to top