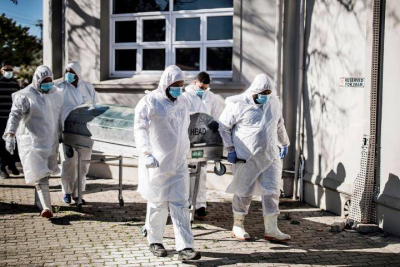 Mkhize said on Friday that 11,761 new cases were confirmed in the past 24 hours — but this was at a positivity rate of 19%, significantly lower than the positivity rate from the height of the second wave of infections over the past month.

But this good news comes against the backdrop of SA reaching another grim milestone in its battle against the pandemic. Mkhize reported that another 575 Covid-19 related deaths had been reported, meaning that more than 40,000 have now died across SA.

Mkhize has also revealed that anaesthetist Dr Rudolph Mononyane, who was one of the doctors who tried to save the life of the late Minister Jackson Mthembu at Milpark Hospital, died shortly afterwards in a helicopter crash in KZN.

Mononyane had been part of the emergency team deployed to save the minister’s life before he died due to Covid-19-related complications on Thursday.

Mkhize said the country had weathered the Covid-19 storm because of people like Mononyane and co.

He called for the Civil Aviation Authority to investigate thoroughly the circumstances leading to the helicopter crash.

"We call on the aviation industry to thoroughly investigate the circumstances surrounding the helicopter crash so that we may never in future suffer such a devastating loss of valuable front line responders who travel in emergency aircraft.

"We convey our sincere condolences to the families and loved ones of our colleagues that we lost in this terrible accident. May their souls rest in eternal peace and may we never forget that they remained dedicated and committed to delivering quality healthcare right to the end of their lives," he said.

Meanwhile the World Health Organization said on Friday it had reached an agreement with Pfizer for 40 million doses of its vaccine against Covid-19, allowing it to begin vaccinating people in poor and lower-middle income countries under its Covid programme next month.

The Covax programme has signed deals for hundreds of millions of doses to vaccinate people in poor and lower-middle income countries, but has yet to begin vaccinations. Pfizer's vaccine is so far the only one that has WHO emergency approval.

WHO Director-General Tedros Adhanom Ghebreyesus told a briefing that the new agreement with Pfizer should allow vaccinations to begin in February for health workers.

Pfizer CEO Albert Bourla said the 40 million doses announced on Friday would be sold on a non-profit basis. He described it as an initial agreement, and said more doses could be sold through the Covax programme in future.

More in this category: « Flooding expected as tropical cyclone Eloise hits. In a leaked address of ANC Lekgotla Ramaphosa hints loan needed for vaccine rollout. »
back to top