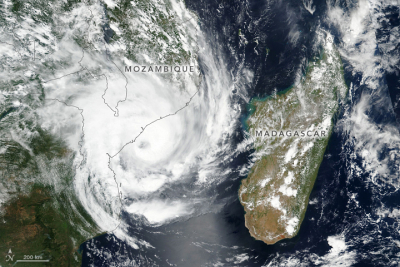 The coastal city of Beira in Mozambique, which houses one of the country's most important ports, has seen mild damage to property and flooding after tropical cyclone Eloise made landfall early on Saturday, an official said in a television report.

The cyclone has since lost its strength and has been downgraded to a tropical storm, according to the World Meteorological Organisation (WMO).

"Beira had mild damage, but it is too early to quantify the extent and scale of destruction," Luisa Meque, president of Mozambique's National Institute for Disaster Risk Management and Reduction (INGD), said in a television interview with national broadcaster TVM.

The SA weather service said Eloise made landfall around 2.30am on Saturday with wind speeds of 160km per hour.

Cars were submerged in water, walls of some low-lying buildings collapsed and swathes of land were flooded in Beira, posts on Twitter showed.

Beira was the epicentre of damage from cyclone Idai in March 2019, which ravaged the country's second biggest city and killed more than 1,000 people across Mozambique, Malawi and Zimbabwe.

Mozambique National Institute of Meteorology (INAM) said Sofala province, which includes Beira, had seen 200mm of rainfall and was likely to see another 100mm of rain over the next 24 hours, the television channel reported.

"The cyclone is still in the territory of Mozambique and should make an exit at 8pm today," Gorkhmaz Huseynov, head of the Mozambique delegation of the International Federation of Red Cross, told Reuters.

WMO late Friday had upgraded the storm, fuelled by the warm Indian Ocean waters of the Mozambique channel, to a tropical cyclone with strength equivalent to a Category Two storm.

Category Two strength — on a five-level scale — refers to hurricanes with maximum wind speeds of 154-177km/h.

"By tomorrow, it will be an overland tropical depression. At that time the speed will be 60km/h, "Mbazhi Maliage, a forecaster at the SA Weather Service, told Reuters.

Good morning. Depression #Eloise is currently over the extreme northern parts of Limpopo resulting in heavy rain in some areas of Limpopo and Mpumalanga today and later northern KZN. Main concern will be rainfall. Winds will not be a major factor. pic.twitter.com/8W0A52ckzD

The weather department said on its official Twitter handle that more than 200mm of rainfall was expected from Saturday night to Monday in some parts of SA's Mpumalanga and KwaZulu-Natal provinces and in the southern African kingdom of Eswatini.