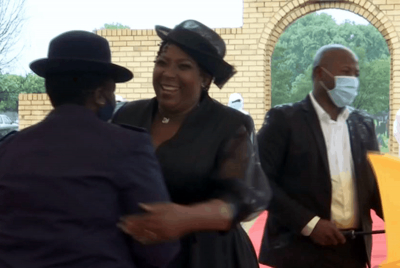 Mpumalanga premier Refilwe Mtsweni-Tsipane has apologised for not wearing a mask at Jackson Mthembu's funeral at the weekend.

In a statement released on Monday evening:  Mtsweni-Tsipane said "I have noted social media and media reports revealing moments where I was walking around without a mask. I have since reflected deeply on this momentarily lapse, which I regret profusely. I should have known better as a public figure, and more so attending a Covid-19 funeral."

"To this effect, I have deposited a statement of guilt at the Vosman police station in Emalahleni and where I accepted the necessary fine," she said.

She said that he wanted to apologise to President Cyril Ramaphosa, Deputy President David Mabuza, Mthembu's family, the people of Mpumalanga and the rest of the country.

"To further demonstrate my remorse, I have bought 1,000 masks that will be distributed in Emalahleni as part of public education and awareness campaign to demonstrate the serious nature of Covid-19.

"I wish to take this opportunity to express my condolences to all the families who have lost their loved one to the pandemic. I also wish those who are currently struggling with the virus a speedy recovery," she said.

Earlier the premier's spokesperson Sibongile Mkami-Mpolweni said: "It does make sense and it does happen. It may not have happened to you, but a lot of people say it has happened to them."

At some stage, a police officer told the premier that she must wear a mask and she made physical contact with the cop.

Mkani-Mpolweni said there was nothing wrong with that: "It was not a hug; she touched her shoulder. She could have fallen had she not leaned over."

A person can be fined up to R1,500 for failing to wear a mask after being warned by a police officer.

Mtsweni-Tsipane said she had also decided to go into isolation for 14 days.

More in this category: « The businesses hardest-hit by liquidations and insolvencies in South Africa. COVID-19 Daily Update: SA records 4 551 new cases,243 more deaths. »
back to top