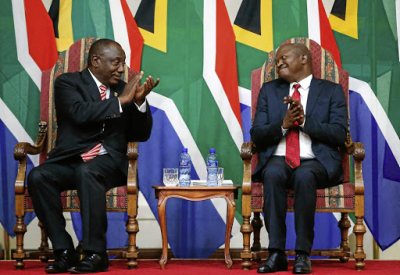 President Cyril Ramaphosa and Deputy President David Mabuza will receive the first batch of COVID-19 vaccine that is expected to land in South Africa on Monday.

The first shipment of India-made COVID-19 vaccines is en route to South Africa as the countdown to their arrival in South Africa is in full swing.

South Africa has been the worst hit on the African continent and has reported the most cases so far.

The country has seen a big surge in infections in January driven by a new, more contagious variant of the virus called 501Y.V2.

However, tens of thousands of the tiny, life-saving vials are finally on their way to South Africa.

On Sunday, at 10 am local time, the first 1 million doses of the COVID-19 vaccine flew out of Mumbai in western India on an Emirates flight, in presence of Consul-General Andrea Kühn, the Consulate team and Indian counterparts.

After a brief pitstop in Dubai, the vaccines are on their way to Johannesburg where they are expected to arrive by Monday.

According to a statement released by the Presidency on Sunday evening, Ramaphosa and Mabuza will be joined by Minister of Health Dr Zweli Mkhize, Acting Minister in the Presidency Khumbudzo Ntshavheni, High Commissioner of the Republic of India His Excellency Jaideep Sarkar and Dr Morena Makhoana, Chief Executive Officer of Biovac.

"High Commissioner Sarkar will represent India as the country of origin of the first vaccine to be rolled out in South Africa. The Serum Institute of India has been licensed to produce a vaccine that has been developed by the multinational pharmaceutical and bio pharmaceutical company, AstraZeneca, in collaboration with the University of Oxford," reads the statement.

The arrival of the first consignment at OR Tambo International Airport marks the start of the vaccine rollout which President Ramaphosa describes as the largest and most complex logistical vaccine undertaking in South Africa’s country’s history, says the Presidency.

This will be the first shipment of COVID-19 to arrive in South Africa. The country plans to start administering the vaccine a week after the vaccine arrives.

The details for the arrival of the Covid-19 vaccines are as follows:

Reports suggest that South Africa paid upwards of five dollars per dose, because the country has been categorised as an upper-middle income nation.

More in this category: « COVID-19 Daily Update: SA records under 5,000 new cases in the last 24 hours. Alcohol ban set to be lifted this week, curfew eased and SA likely to move to Alert Level 2. »
back to top