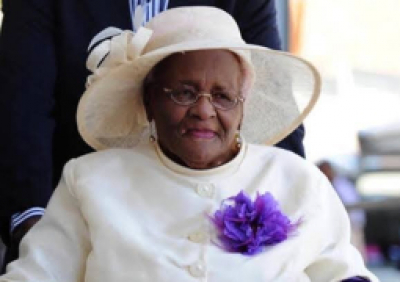 A Special Provincial Official Funeral Category 2 is accorded to distinguished persons specifically designated by the President of South Africa on request by the Premier of a province.

Mme Kotane was the wife of late struggle icon, former General-Secretary of the South African Communist Party (SACP), Moses Mauwane Kotane. Moses Kotane died in Moscow on May 19 1978. His remains were repatriated to SA in 2015.

Ramphosa said Kotane’s passing is a great loss for the country.

"She was dear to all of us, and was very loved in the ANC. For us, it’s a big loss, a big tree has fallen. Her age matched exactly the age of the ANC. We will miss her dearly. We wish to take her to her resting place knowing that she has played a key role in the country, "Ramaphosa said following his visit to the family on Friday.

Kotane participated in the defiance campaigns in the 1950s and the mobilisation towards the adoption of the Freedom Charter in 1955.

She was part of a group of women who played a leading role during the 9 August 1956 Women’s March to the Union Buildings, and was among the women who were detained by the apartheid regime.

Kotane’s funeral will be held on Saturday at Pella village outside Zeerust in North West. The funeral service will start at 7am.

North West Premier, Professor Tebogo Job Mokgoro will together with other dignitaries, including Ministers Blade Nzimande and Lindiwe Sisulu, deliver speeches and messages of condolences as part of the funeral proceedings.

The eulogy will be delivered by former President, Kgalema Motlanthe.

As a sign of respect, the President has instructed that all National flags be flown at half-mast in the North West on the day of the funeral.

Tweet
More in this category: « More than 6000 state officials face criminal charges relating to UIF. SA is on the right track to start vaccination rollout - Mkhize. »
back to top