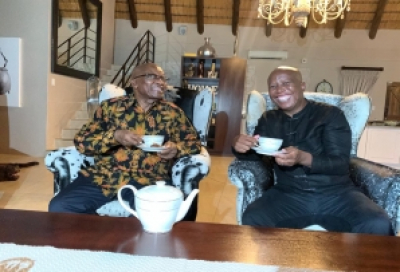 President Cyril Ramaphosa has broken his silence on the issue of former president Jacob Zuma defiance of taking part in proceedings at the Commission of Inquiry into State Capture.

The Constitutional Court has ordered Zuma to comply with the commission and to answer questions directed at him. The court also said he had no right to remain silent.

A defiant Zuma said he did not fear being arrested for his stance as he had previously been imprisoned for standing by his principles.

Ramaphosa, who addressed journalists outside the home of the late Mama Rebecca Kotane, pleaded with Zuma to reflect on his decision.

"He has expressed his own thoughts and views. This is a matter I am sure he is going to give more thought to because he is being counselled by various people from different organisations."

"These are issues he must give consideration to in his own mind, in his own time, let us give former president Zuma time and space to think about this."

"I am prepared to leave it there, of course we have not discussed this matter in the ANC, which we will do. Anybody who says much more, will be missing the point."

He said calls for Zuma to have his ANC membership suspended were pre-emptive and said that was not a matter currently being considered by the ANC.

"That is not something in consideration. All of us need time to think. We need to think carefully and deeply before coming to a rushed conclusion, which has no bearing, "said Ramaphosa.

On Friday afternoon, EFF leader Julius Malema touched down in Nkandla in a chopper ahead of a meeting over tea with the former president.

The meeting between the two has sparked debate, as it was the first time Zuma and Malema would be meeting cordially, since their relationship soured about a decade ago while Malema was ANC Youth League president and Zuma state and ANC president.

EFF spokesperson Vuyani Pambo declined to comment on what was discussed at the meeting.

"The meeting went very well and the tea was very hot and sweet. So, the practice of having tea is a slow process, you can’t gulp it like you do with other beverages, you have to take your time. Essentially it was a meeting with the president [of the EFF] and the former president [Zuma]."

Pambo refused to discuss Malema’s disdain for Zuma throughout the years or even a change of heart.

Tweet
More in this category: « SA is on the right track to start vaccination rollout - Mkhize. COVID-19 Daily Update: SA records 3 749 new cases with 297 related deaths. »
back to top