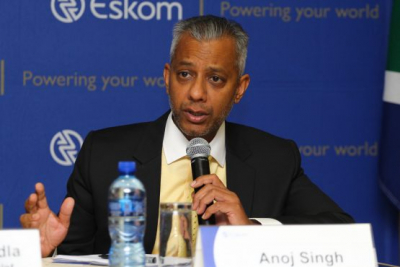 A new investigation by amaBhungane has found questionable ties between Nedbank and state-captured-linked Regiments Capital, relating to contracts and millions of rands in commissions paid pushing Nedbank accounts to state-owned companies. Wherever investigators looked in Regiments’ business operations, Nedbank was close behind offering products such as loans and complicated financial services in its wake. The bank has denied any unlawful activity. [amaBhungane].

Former Transnet treasurer Mathane Makgatho was tired. She had spent two years being gaslit by senior executives at Transnet who tried to ram questionable transactions down her throat. As treasurer of the state rail company, she had stood her ground. But here, once again, was Regiments Capital offering a deal that her years of experience told her was simply implausible.

She had reason to be suspicious.

A year earlier, Transnet’s chief financial officer, Anoj Singh, had handed her a proposal from Regiments for a R5-billion Nedbank loan and told her to sign it "today". But when she read it, alarm bells went off.

Instead of a direct loan from Nedbank, the deal was to be channeled through an intermediary company which would collect interest on behalf of Nedbank, a convoluted arrangement that would cost Transnet R750-million more than was necessary.

The proposal was so alarming that she had gone straight to Transnet chief executive Brian Molefe: "I was irate… I explicitly told him that should we approve the structure, we will go to jail for stealing money," she later told the State Capture Commission.

That 2013 deal had disappeared, but Regiments had not. And now, in July 2014, she was again being asked to sign off on a Regiments proposal involving Nedbank that made her deeply uncomfortable because she felt it was so obviously mispriced.

As far as Makgatho could tell, what was fuelling the pipeline of questionable deals landing on her desk was the rather too close relationship between Regiments director Eric Wood and Nedbank’s head of credit and international derivatives, Moss Brickman.

Makgatho told the commission that she was so appalled by Wood and Brickman’s latest gambit that she asked the bank to "lodge a complaint" with Nedbank Capital, the division where Brickman worked.

"I was not happy [with] what … I thought it was an improper relationship… Regiments will come with certain proposals … and at the back of those proposals there was always one common bank and that was Nedbank."

Makgatho resigned soon after, in early 2015, but she had put her finger on a question amaBhungane had been asking for years: Why was it always Nedbank?

To access all the documents used in this investigation, go to amaBhungane’s evidence docket here.

In brief: The case against Nedbank

Wherever we followed Regiments on its destructive path through state-owned entities and municipalities, we kept seeing Nedbank offering loans, complex financial products called interest rate swaps, and millions of rands in hidden commissions.

The case we will outline in the pages that follow is this:

For years, Regiments persuaded its clients – public entities who paid and trusted it for independent advice – to take up financial products, often provided by Nedbank. But Regiments’ advice was tainted by the promise of massive additional fees.

This was initially set out in a "highly confidential" commission agreement which saw Nedbank pay millions in "introduction fees" for each new deal Regiments brought to the bank. Later, Nedbank agreed to act as postman, delivering millions of rands of public money to the controversial firm, with the blessing of Regiments' public sector clients.

By our calculation, Regiments was able to generate at least R95-million in fees from Nedbank via these two methods, plus another R120-million from a set of Transnet transactions where the fees once again flowed via Nedbank but without, the bank claims, its knowledge.

Nedbank asked that Amabungane to publish this statement in full:

Nedbank has at no time acted unlawfully or improperly in its dealings with Regiments and the affected counterparties; or Regiments clients. Nedbank denies any inference or accusation that it was complicit in any alleged scheme by Regiments to defraud its clients or to extract undue benefit from them.

The Corporate and Investment Banking clients of Nedbank are sophisticated entities and we correctly rely on the legislative framework regulating the banking and financial services sector as well as the financial conduct of public entities. In addition, we rely on their directors, office bearers and financial control structures to manage their own internal affairs and to ensure that their governance responsibilities are adhered to. Given that Nedbank was not an adviser to the affected Regiments clients regarding the transactions referred to, Nedbank was not, and is not in a position to challenge the commercial objectives of these clients.

The Introduction of Derivatives Transactions agreement was concluded on 25 May 2009 between Nedbank Capital (as it then was) and Regiments Capital on the express premise, and documented as such, that:

There was nothing unlawful or unusual about the agreement which Nedbank had entered into, on the understanding that Regiments would adhere to its terms, coupled with its obligations as a registered Financial Services Provider (‘FSP’). Regiments was obliged to comply with the Financial Advisory and Intermediary Services Act and General Code of Conduct for FSPs which, inter alia, required of it to disclose its fees to its clients and to avoid conflicts of interest.

If Regiments failed in its obligation to make full and proper disclosure to its clients and or otherwise engaged in improper or unlawful conduct, Nedbank cannot be held accountable for this.

Nedbank’s activities are conducted in an ethical and transparent manner for the benefit of our clients and stakeholders. All Nedbank’s client relationships are subject to the Financial Intelligence Centre Act, governance and regulatory reporting requirements, to which we strictly adhere.

We reiterate that Nedbank has a zero tolerance for corruption, and we expect all of our stakeholders, including our clients, service providers and staff to conduct themselves in an ethical manner and with corresponding integrity.

Nedbank is supporting, and will continue to support and cooperate with, the relevant authorities.

The amaBhungane Centre for Investigative Journalism, an independent non-profit, produced this story. Like it? Be an amaB Supporter to help us do more. Sign up for our newsletter to get more.