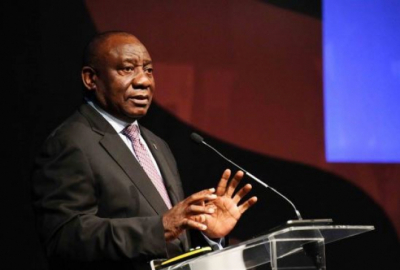 President Cyril Ramaphosa will deliver this year’s State of the Nation Address (SONA) under a significantly altered global and domestic environment.

This environment is a result of the COVID-19 pandemic that continues to sweep through the world, claiming lives and livelihoods in its wake.

The new normal which all of us have had to adapt to, includes social distancing, the continuous washing of hands and the compulsory wearing of masks when going out into public spaces.

This new way of life has also necessitated that the annual SONA be held virtually. The President will present the pared down address that will not include signature traditions such as the 21-gun salute and the ceremonial guard.

While there will be no red carpet at this year’s joint sitting of the National Assembly and the National Council of Provinces, Ramaphosa will still share with citizens, government’s service delivery plans while also highlighting areas of focus for government.

The past year has been a difficult one for many countries, South Africa included, as world leaders scrambled to strike a balance between saving lives and livelihoods as the virus spread across the world.

While it is common knowledge that the South African economy has been battling weak economic growth even prior to the country reporting its first COVID-19 case on 5 March 2020, South Africa got to work and implemented several measures aimed at saving lives and jobs.

Having imposed a national lockdown in March, government announced a massive social relief and economic support package of R500 billion which amounts to around 10% of Gross Domestic Product (GDP) to mitigate against the blow of COVID-19.

Just over R300 billion was for interventions related to tax relief for businesses hit by the pandemic. The remainder was to act as a safety net for social relief.

The TERS was introduced by government to provide economic relief to the vulnerable and assist employers to protect jobs while the Social Relief of Distress grant was set up for unemployed individuals who do not receive any other form of social grant or Unemployment Insurance Fund payment.

By December, R13.5 billion had been disbursed through the special COVID-19 Social Relief of Distress (SRD) grant to more than six million eligible beneficiaries.

Government also announced that an additional amount of R2 billion would be made available to assist small, micro and medium enterprises (SMMEs) and spaza shop owners and other small businesses.

Meanwhile Cape Town motorists and pedestrians have been advised of minimal parking restrictions and temporary road closures in and around Parliament ahead of the hybrid Joint Sitting of the State of the Nation Address (SONA).

Ramaphosa will address SONA  on Thursday at 7pm.

Roads that will be affected from 10 – 11 February can be found on this link: https://tinyurl.com/yyn77gxe.

"Parliament apologises for any inconvenience caused by the road closures to members of the public," Parliament said in a statement on Tuesday.

The Joint Sitting of the National Assembly and the National Council of Provinces will be held in a hybrid format as part of efforts to adhere to the National State of Disaster lockdown regulations – Alert Level 3.

No more than 50 participants will be allowed inside the National Assembly Chamber. All other Members of Parliament and guests will connect through a virtual platform.

Tweet
More in this category: « Eskom implements stage 2 load shedding from 10pm. Government expected to extend national state of disaster. »
back to top