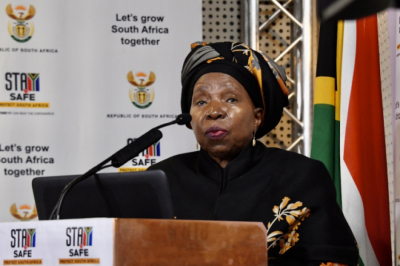 Government is expected to extend its present state of disaster by another month when it officially comes to an end on Monday (15 February).

The extension would allow government to continue with its current lockdown restrictions, introduced to curb the spread of the Covid-19 pandemic.

A further extension would also mean that a state of disaster will have been in effect in the country for a full year, with critics now pushing for changes to the current system to allow for greater oversight.

While the state of disaster was originally set to lapse on 15 June, the act provides that it can be extended by the Cooperative Governance and Traditional Affairs (Cogta) minister by notice in the gazette for one month at a time before it lapses.

In a gazette published on Wednesday (13 January), Cogta minister Nkosazana Dlamini-Zuma said that latest the extension takes into account the need to continue augmenting the existing legislation and contingency arrangements undertaken by organs of state to address the impact of the disaster.

The opposition Democratic Alliance (DA) has now called on President Cyril Ramaphosa to submit any possible extension of the national state of disaster to parliament for approval and review.

It has also indicated that it will prepare draft legislation in 2021 to amend the Disaster Management Act and bring future lockdowns under parliamentary control.

South Africans should not be forced to go to court every time we need explanations from government. That is why we have Parliament. Moreover, the power to make laws should be with Parliament,” it said in a statement on Tuesday.

"But the risk of South Africa being governed under a perpetual state of national disaster with little parliamentary oversight and no parliamentary control go beyond Covid-19 pandemic."

The DA has says the use of section 27 of the Disaster Management Act, and the repeated extensions, has created a 'de facto state of emergency', with government assuming wide-ranging powers over every aspect of South African life.

However, unlike a state of emergency, the government’s decisions under a state of disaster are not subject to a parliamentary veto, and so there is little legislative control over what government is doing in the name of fighting Covid-19, the DA said.

Tweet
More in this category: « Road closures ahead of SONA on Thursday. National minimum wage increases to R21.69 per hour 1 March. »
back to top