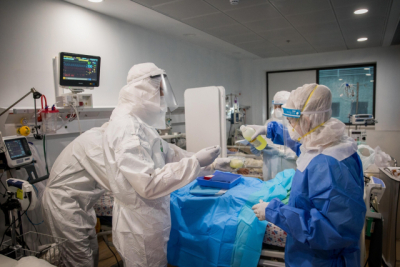 Minister of Health Dr Zweli Mkhize said in a statement that the cumulative number of COVID-19 cases in South Africa now stands at 1 487 681.

This is an increase of 2781 new cases identified in the last 24 hours.

The cumulative total of tests conducted to date is 8 641 447 with 35 718 new tests recorded since the last report.

The Eastern Cape province has the most deaths, followed by the Western Cape, KZN and Gauteng.

Of the latest deaths, Mkhize said the majority of the deceased came from Gauteng, Eastern Cape and the Free State.

The minister added that the recoveries now stand at 1 383 626, representing a recovery rate of 93%.

Meanwhile During a hybrid joint sitting of the National Assembly and National Council of Provinces on Thursday, President Cyril Ramaphosa said beyond the statistics lies a human story of tragedy and pain.

"There is no family, no community, and no place of work that has not lost someone they knew, worked with, and loved."

He also applauded the resilience of the hospital workers whose mission is to save lives, knowing that they themselves are at risk of infection.

"It is a wonderful account of the courage of the police officer, the soldier, the essential worker, the carer and all those on the frontline who have kept our country safe, our people fed and our economy going."

He has called South Africa to continue with the spirit of resilience, which should drive everyone to build a new and equal economy and a better, more just society.

"The year ahead must be a time for change, for progress and for rebirth. It must be a year in which we rise."

He also confirmed that the first batch of the in-demand Johnson & Johnson vaccines against COVID-19 will land in South Africa next week.

Ramaphosa told Parliament that the first phase of the vaccination programme would go as planned and that healthcare workers would now get the Johnson & Johnson jab.

Government has secured nine million doses of the Johnson & Johnson vaccine, of which 80 000 doses will arrive in the country next week.

According to the President, about 500 000 vials of vaccines will follow in the next four weeks, while 12 million vaccine doses from the global COVAX facility and 20 million from Pfizer, will be delivered at the end of the first quarter.