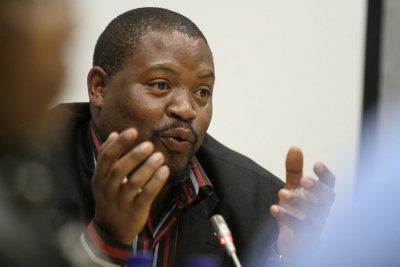 A company with close ties to the ANC'S Gauteng provincial secretary, Jacob Khawe, is in the Public Protector's sights following its appointment to render services within Emfuleni Local Municipality.

One of the directors of the company, Isaac Mashaba is alleged to be extremely close to Khawe. Khawe served as the mayor of the embattled municipality before moving to the ANC's provincial office to take up his current position.

Public Protector Busisiwe Mkhwebane's spokesperson Oupa Segalwe confirmed to the publication that an investigation which was lodged with the office in September 2020 was ongoing.

"The investigation is ongoing. It centres among other things alleged procurement irregularities pertaining to a company called Comperio Forensic Services, which allegedly rendered shoddy investigative services to the municipality and was getting paid huge sums of money on a monthly basis. It is alleged to have strong links with political office bearers," Segalwe said.

The four-page complaint seen by this publication alleged that there were various "irregularities with regards to a tender to conduct forensic investigations in June 2019."

According to the complaint, Comperio was supposed to start work on January 15, 2018, and end in February 2019.

"And consequently, Comperio Forensic Services are rendering different services without being properly appointed and that their invoices run into millions of rand, with some payments being made without authorisation. The complainants further allege that they lodged several complaints with the Supply Chain Management (SCM) regarding the irregularities, but the Municipal Manager and Chief Financial Officer have neglected or refused to investigate the complaint."

The PP's office has since requested the municipality to explain how Comperio Forensic Services was appointed for all the work they are doing, the scope of the works, compensation structures, and if the invoices paid were in terms of the agreed SAICA-rates.

This week, Emfuleni Local Municipality told the publication that Comperio Forensic was appointed on March 6, 2017, as part of a panel of service providers to provide various financial transactions and models for a period of three years under the category of Forensic, Internal Audit and Risk Management.

Municipal spokesperson, Makhosonke Sangweni, said the Service Level Agreement was entered into on April 25, 2017, and the contract term ended on February 5, 2020.

The municipality, however, failed to indicate how many contracts Comperio have received.

The paper was informed that the work that has been done by Comeprio has been questioned over the quality of its work and why it has been reinstated to investigate issues it had already investigated.

Tweet
More in this category: « SA Schools ready to receive pupils back and health & safety of children a top priority. Gauteng Arts refutes Sunday Times report that it paid R500 000 to Dr Tumi for online concert as misleading. »
back to top