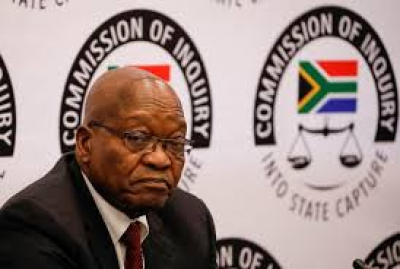 Deputy Chief Justice and State capture commission chair Raymond Zondo said on Monday the commission would approach the Constitutional Court to find former President Jacob Zuma guilty of contempt of court, and would request a term of imprisonment for him.

And to set an example, the Constitutional Court must impose a jail term for his defiance of it and the Zondo commission of inquiry into state capture.

This after Zuma once again failed to obey a summons issued for his appearance at the commission on Monday.

To ensure that no-one copies Zuma's antics, said Zondo, there must be a strong message that such actions had severe consequences.

Zondo said Zuma, as a former president of the country who on two occasion took a public oath to protect and defend the constitution, must lead by example.

Having failed to do so, Zuma was openly encouraging lawlessness that would render the country a banana republic.

He must be stopped in his tracks, said Zondo.

"This is very serious because if it is allowed to prevail, there will be lawlessness and chaos in the courts.

"There may be other people who will decide to follow his example when they are served with summons in other court processes.

"If the message that is sent out is that people can ignore or disregard summons and orders of courts with impunity, there will be very little that will be left of our democracy."

Zuma said that he was prepared to go to jail if he was arrested like he did during apartheid.

Some of his supporters, including the MKMVA, have said that he should not abide by the apex court’s ruling and it has threatened unrest if he was arrested.