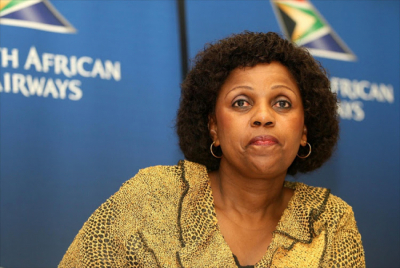 Former SAA board chairperson Dudu Myeni has lost her bid to suspend the execution of a life-time delinquency order issued against her in the North Gauteng High Court.

Last week, Myeni made an urgent bid before the full bench of the High Court asking it to suspend the order, saying she has lodged appeal papers in the Supreme Court of Appeal (SCA).

Myeni asked the court to note that Judge Ronel Tolmay had erred in her conclusion that Outa (the Organisation Undoing Tax Abuse ) and the SAA Pilots' Association (Saapa) had in fact established exceptional circumstances to succeed in their application.

Myeni’s legal counsel, advocate Dali Mpofu, argued that she had resigned her memberships to several boards in the country.

Mpofu also indicated that Myeni has lodged an appeal in the SCA to overturn the May 27, 2020 ruling against her.

But this was rejected by Outa legal counsel advocate Carol Steinberg, who argued that Myeni failed to lodge appeal papers with the SCA in January this year after Judge Tolmay dismissed her leave to appeal application in December last year.

Steinberg argued that Myeni had failed to meet the prescribed time to lodge an appeal in the SCA. Steinberg said Myeni had filed a condonation, saying it was likely not to succeed in the SCA.

"Ms Myeni did everything in her power to obstruct this outcome and engaged in repeated conduct throughout the trial which was calculated to cause maximum delay and disruption."

"Before addressing the merits of the appeal, we highlight that Ms Myeni has failed to file a petition in the Supreme Court of Appeal in time or in any condonation application. Even if Ms Myeni were to file a belated petition, coupled with an application for condonation (which has not yet been done), this would not suspend the delinquency order," Steinberg said.

Her application was struck off, not dismissed, which means that the merits of the application were not considered, following the hearing by the full bench of the high court during the first week of February.

In May 2020, the high court declared former SAA chair Myeni a delinquent director for life, arising from an application by OUTA and the SAA Pilots’ Association (SAAPA).

In June 2020, Myeni filed an application for leave to appeal, which automatically suspended the delinquency order until her appeal was finalised.

In December 2020, OUTA and SAAPA won an interim enforcement order against Myeni, which meant that the delinquency order takes effect even if an appeal is pending; at the same time, Myeni lost an application to the Pretoria High Court for leave to appeal.

In February 2021, Myeni appealed that interim enforcement order to a full bench of the Pretoria High Court, pending an attempt to appeal against the main order through the Supreme Court of Appeal (SCA), although such an application had not been filed at the SCA.

The high court has now ruled that her application for leave to appeal the main order in the SCA has lapsed as it was not filed before the deadline of 22 January 2021. Although Myeni may apply to the SCA for condonation of late filing, the court said that until that happens, there is no appeal. The court also said that although her delay in filing to the SCA was negligible, her prospects of succeeding in a condonation application "are rather slim". Thus, as there is no appeal against the main order pending, her application to appeal the interim enforcement order was struck off.

Myeni was ordered to pay the legal costs of Outa and Saapa.

Tweet
More in this category: « NSRI warns of the silent killer – drowning. Zuma hits back saying no amount of intimidation will change his position. »
back to top