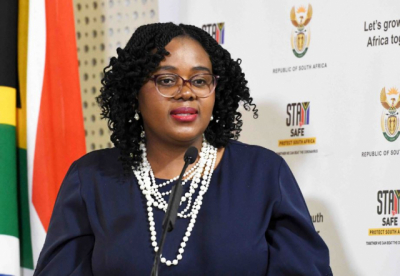 Tourism Minister Mmamoloko Kubayi-Ngubane has emphasised the importance of the Tourism Equity Fund (TEF) as part of government’s intervention to build an inclusive tourism economy.

The Minister’s remarks comes after her meeting on Monday with Solidarity and AfriForum, following a letter from their attorneys in which they threatened legal action against the rollout of the TEF.

The organisations questioned the legality, morality and transformative outcome of the qualification criteria for the fund, suggesting that it deviates from the provisions of the Broad-Based Black Economic Empowerment (B-BBEE Act).

"We communicated to Solidarity and AfriForum that the TEF is a necessary intervention for creating an inclusive tourism economy, in which previously disadvantaged individuals, youth and women, are represented and can actively participate in ownership and control.

"This fund will support our collective efforts towards economic recovery and reconstruction so that we can move firmly towards the eradication of the legacy of colonialism and apartheid," the Minister said in a statement on Tuesday.

The fund was established by the Department of Tourism in partnership with the Small Enterprise Finance Agency (sefa), as a new financial support mechanism to stimulate investment and transformation in the tourism sector.

"It is crucial to re-emphasise that this is not a relief fund, as we are finding this to be a source of confusion. The fund will provide a combination of debt finance and grant funding to facilitate equity acquisition as well as new project development, to broaden participation by all South Africans and not just a few dominant players," the Ministry said.

The fund was set up as public/private partnership, in particular with commercial banks, in an effort to crowd-in investments in the tourism sector so as to increase diversification and the broadening of ownership of tourism attractions in South Africa.

The government delegation, led by the Minister, utilised the occasion to communicate government’s unwavering commitment to the transformation agenda.

"We have a responsibility to engage with as many stakeholders and role players in the tourism sector as possible, so that we can clarify the thinking behind government’s policy decisions.

"We believe that those who know and understand the history of this country, need little convincing that redress is a necessary mechanism towards building a non-racial society, as mandated by the Constitution.

"Our ultimate goal as government is to ensure that we successfully implement our vision of building a rapidly and inclusively growing tourism economy that is innovative and leverages on our heritage, "Kubayi-Ngubane said.

The meeting was also an opportunity to engage and appreciate their concerns and views on the state of tourism in our country, in the context of the fund objectives and goals.

The application process is open and accessible to all qualifying entrepreneurs.

"Enterprises are encouraged to seize the opportunity and seek support from the fund through sefa. There has been an overwhelming response from entrepreneurs since the call for proposals was made during the virtual launch on 26 January 2021 by President Cyril Ramaphosa, whose support for this project remains inspirational," the Ministry said.

Twitter
More in this category: « South Africa secured enough Covid-19 vaccines for everyone who needs it - Mkhize. N3 highway is getting an upgrade – including a new R300 million bridge. »
back to top