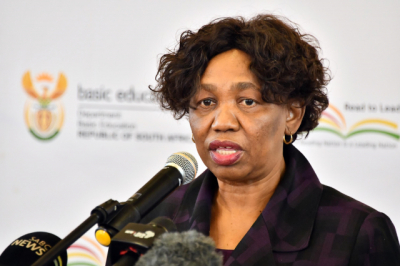 Basic education minister Angie Motshekga has hit back at criticism after a video of her saying "educated men won't rape" went viral on social media.

Motshekga was at Nellmapius Secondary School when she told the group of learners that educated, civilised men did not rape. Schools reopened yesterday for the new education year.

She said: "This government prioritised education because it knows that it’s only through education that we can deal with some of our challenges, because an educated man won’t rape."

A storm erupted after she spoke, with different sectors of society – from gender specialists to ordinary people – asking what one had to do with the other.

We urgently need a new minister of basic education.

Angie Motshegka exhibits a lack of understanding about how and why Rape and GBV occurs in South Africa.

She states “an educated man will not rape”. That is pure nonsense pic.twitter.com/BHdUbRWaKG

Those who criticised Motshekga’s statement said rape in schools was at times perpetrated by teachers or caretakers.

The Education Department said, however, that the remarks had been taken out of context and the minister had made them in relation to gender-based violence.

"Rape is indeed about power, hence the department has programmes to educate the boy child to appreciate the importance of how to deal with power relations between men and women from a young age, "she said.

Her remarks had to be taken in this context in order not to confuse people and the learners, Motshekga said.

She said men needed to be educated about how to deal with power, patriarchy and negative or toxic masculinity.

"Educating men about power relations is also important in the fight against rape," she added.

"Regarding the reaction of the learners, I was not going to debate because the purpose of my remarks was to encourage them to be educated on GBV, including educating them about women abuse."

Tweet
More in this category: « N3 highway is getting an upgrade – including a new R300 million bridge. ANC to probe a 'missing' clause on internal campaign funds. »
back to top