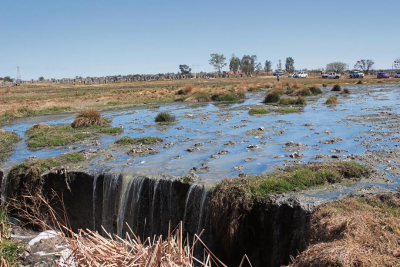 The South African Human Rights Commission (SAHRC) has recommended that the Emfuleni Local Municipality be put under national administration, following damning findings against municipal officials in their report into the Vaal River sewerage crisis.

The Vaal River system, on which approximately 19 million people depend for drinking water and commercial use, is polluted beyond acceptable standards.

In its findings, the SAHRC noted that the Vaal River was polluted "beyond acceptable standards". This was due to kilolitres of untreated sewage entering the Vaal River because of inoperative and dilapidated wastewater treatment plants, which have been unable to properly process the sewage and other wastewater.

The commission found that the running sewerage seeping into the Vaal River was caused by Emfuleni’s failure to properly implement its mandate. Damage to the infrastructure of the Vaal River system and a failure by officials to deliver on their mandates was blamed for the events which led to the environmental crisis.

The SAHRC also recommended that public servants and municipal administrators and staff who had failed to comply with their obligations under the Public Service Act, the Municipal Service Act and the Municipal Financial Management Act contributed to the disintegration of the municipality, be disciplined or dismissed in accordance with the law.

The SAHRC requested that all parties to which the above recommendations apply, respond to the commission jointly or separately, within 60 days of receiving the final report.

"Such an intervention can also make use of the services of organs of state such as Rand Water and Salga [South African Local Government Association], given that the minister for DWS [Department of Water and Sanitation] can issue directives to Rand Water, and further facilitate the implementation of DWS’s current and impending interventions."

The cabinet should seriously consider taking a decision for the national government to intervene in the running of the Emfuleni local municipality, said the SAHRC.

#VaalSewage Final Report of the Gauteng Provincial Inquiry Into the Sewage Problem of the Vaal River is available on our website https://t.co/upZvYSKYlq pic.twitter.com/Lys5TUgnnu

Public servants and municipal administrators and staff who failed to comply with their obligations should be disciplined or dismissed.
Tweet
More in this category: « Billions of rands lost due to cigarette ban - Survey. Lamola defends the judiciary after attacks by EFF leader Julius Malema. »
back to top