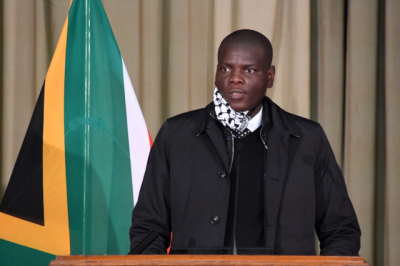 Justice and constitutional development minister Ronald Lamola has warned those launching attacks against the judiciary, saying doing so without presenting evidence undermined public confidence in the country's judges.

Opening the second day of the debate on the state of the nation address (SONA), Lamola used his speech to defend the judiciary, saying it was the "cornerstone of our constitutional democracy".

Attacks, allegations and conspiracies against the judiciary can erode the confidence of society in the judiciary if not followed up with facts and conclusive investigations. We must remind the EFF leader Julius Malema that public institutions do not fall flat because of conspiracy theories hatched in the forest," said Lamola.

Lamola's defence of the judiciary comes as the country's judges, especially the Constitutional Court, have come under attack by supporters of former president Jacob Zuma and some opposition parties such as the EFF.

Speaking during the Sona debate on Tuesday, Malema said that judges were not special and some sections of society would "rise against them" if they abused their powers.

Meanwhile Lamola did not mention former president Jacob Zuma or his supporters by name, He said "the rule of law is sacrosanct".

This after Zuma on Monday deliberately failed to appear before the commission probing state capture, despite a ConCourt ruling ordering him to do so.

"The constitution and the rule of law are sacrosanct components of our democracy and people in the country must respect these principles. To allow anything else will lead to anarchy and open the floodgates easily to a counter-revolution.

"House chair, in the constitution, we proclaim that all individuals, all organisations within SA, whether public or private, are bound by and are entitled to the benefit of laws that are prospectively promulgated and publicly administered in a court of law," he said.

Lamola lauded those who have so far co-operated with the state capture commission.

"We applaud all South Africans who have thus far co-operated with the work of the commission. The commission is very important for our constitutional democracy, it will help us renew our nation, find the moral compass and build a society free of corruption."

Since its inception, the Fusion Centre has handled 231 cases or incidents related to COVID-19 30 cases were closed after investigation & 31 accused persons are appearing in 14 criminal cases in courts across the country. #SONA2021DEBATE pic.twitter.com/QQ9gO0cP1H

Lamola insisted that President Cyril Ramaphosa's administration was winning the fight against crime and corruption, especially since the establishment of the "fusion centre", where multiple law enforcement agencies shared information and legal strategies.