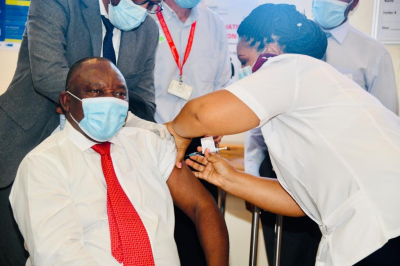 The cumulative number of tests conducted to date is 8 772 743 with 35 413 new tests recorded since the last report.

Meanwhile President Cyril Ramaphosa was among the first to get the Johnson & Johnson COVID-19 vaccine, together with Health Minister Zweli Mkhize and healthcare workers in Khayelitsha in the Western Cape.

After taking the vaccine, the President addressed the media saying this was milestone for South Africa.

"This day represents a real milestone for us as South Africans that finally the vaccines are here and they are being administered. I was rather pleased that there were five people who were vaccinated before me and they are health workers.

Before the arrival of the President, Mkhize witnessed the first health care workers receiving the Johnson & Johnson vaccine. The first health worker to be vaccinated was Zoliswa Gidi-Dyosi.

Leading by example, the President encouraged South Africans to take the vaccine, adding that it was safe.

"I would like to invite South Africans to take this up (get vaccinated), so that we can all be safe, so that we all can be healthy."

Ramaphosa further thanked Mkhize for all his hard work in procuring the Johnson & Johnson vaccine.

"I also want to thank the Minister for having worked so hard. Mkhize spent sleepless nights making sure that the change from the earlier vaccines that we acquired, which proved not to be so effective against the variant we have, happened so quickly and so smoothly.

"I can tell you that he spent sleepless nights sending me text messages almost every hour. It was a joy to finally get his text message that 'President the plane has now left Brussels' and he showed me photographs of the plane as it was being loaded and every step of the way. I am so glad, he has been so focused and working so hard and thank you Minister."

Mkhize also thanked Ramaphosa for his support and healthcare workers as they have endured anxiety, panic, and exhaustion in saving the lives of fellow South Africans.

"This must give hope and encouragement to all our people that we have a chance at fighting this pandemic.

"It was an emotional moment as we tracked the movement of the vaccine. There was a sense of pride as everyone got together to save South Africa. Now at last our healthcare workers have some kind of protection as they deal with the pandemic, "Mkhize said.

Referring to the start of the vaccine programme, Mkhize said this is a beginning of a new era.

Mkhize thanked all the provinces for preparing for the rollout of the vaccines.

The vaccination programme commenced today in Khayelitsha in the Western Cape and is expected to be rolled out to other provinces throughout the country.

The vaccine, which has been approved by the South African Health Products Authority arrived at the OR Tambo International Airport in Gauteng on Tuesday night.

The first batch of 80 000 doses of the Johnson & Johnson vaccine is being prepared for distribution across South Africa with immediate effect.

The Johnson & Johnson vaccine has been shown in extensive trials to be safe and efficacious, and will protect health care workers from illness and death from COVID-19.

Tweet
More in this category: « Lamola defends the judiciary after attacks by EFF leader Julius Malema. Update: 3 ArcelorMittal missing workers found dead after explosion at Vanderbijlpark plant. »
back to top