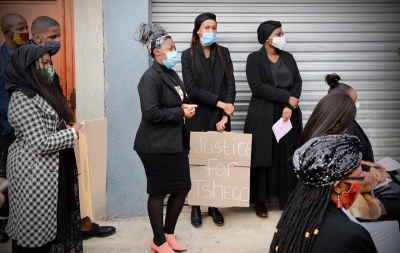 The man who is accused of brutally murdering the heavily pregnant Tshegofatso Pule last year has pleaded guilty.

Muzikayise Malephane appeared in the South Gauteng High Court this morning. He faced charges of murder, defeating the ends of justice and unlawful possession of a firearm and ammunition.

According to the National Prosecuting Authority (NPA), Malephane pointed out that the boyfriend of the deceased, who cannot be named at this point, as the one who allegedly contracted him to commit the murder.

His lawyer told the court the boyfriend did not want his wife to find out that he had impregnated Pule.

The accused has since entered into a plea and sentence agreement with the State.

"He will be turning a State witness. The court confirmed the agreement on condition that he testifies in the State's case against the boyfriend," the NPA explained.

Meanwhile, the NPA has confirmed that the boyfriend has been arrested and is currently in police custody.

Pule, 28, made headlines when her body, covered in stab wounds, was found in June last year, hanging from a tree in a veld in Roodepoort after being reported missing for four days.

She was eight months pregnant at the time.

Malephane was arrested a week later after the discovery of Pule's body following a crime intelligence operation and has since been sentenced to 35 years in prison.

Police Minister Bheki Cele has welcomed the sentence and thanked the team for the excellent job.

"We congratulate the team for doing a good work that led to the sentencing," the Minister said on Friday.

Pule’s family listened to Malephane’s plea agreement with tears and gasps for breath while listening to the gruesome details.

Tumisang Katake, Pule’s uncle, spoke to the media after the sentencing and said: "It hurts to know what she went through, it hurts to hear it and know it is a fact, but this is what we wanted.

"We no longer have suspicions, we have facts."