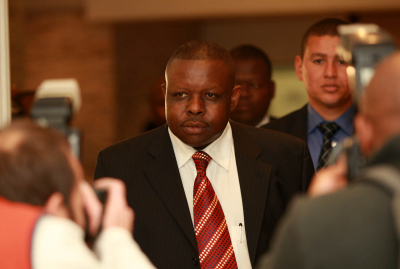 The corruption case against former State Security Minister Bongani Bongo has been adjourned until Monday in the High Court in Cape Town.

On the third day of trial, state witnesses advocate Modibedi Phindela, secretary to the National Council of Provinces, and Penelope Tyawa, acting secretary of parliament and head of administration, gave evidence.

Both confirmed that former evidence leader in the Parliamentary Inquiry into corruption at Eskom, Advocate Ntuthuzelo Vanara had informed them that he was approached by Bongo to collapse the inquiry.

Tyawa testified that as the legislature’s chief administrator, it's not up to her to get involved in the conduct of MPs.

She handed an affidavit deposed by the evidence leader of Parliament’s Eskom Inquiry to the Speaker to act.

The matter was then referred to Parliament’s Ethics Committee.

Bongo’s legal representative, Michael Hellens, was persistent in the matter of why the witnesses did not report the incident to the police or the Directorate for Priority Crime Investigation (the Hawks), but instead reported it to parliament.

Phindela and Tyawa argued that they raised it in a political forum and not as a criminal matter. They said they acted in line with legislation in parliament when they reported the incident.

Hellen argued an error in the affidavit Tyawa signed on 14 August 2018 wherein she refers to Bongo as the minister of intelligence. Hellen said Bongo was relieved from his role as minister of state security on 26 February 2018.

She attributes it to the time lapse between the affidavit and the charge sheet.

But Hlophe said she did not mention it during her examination, cross-examination or re-examination. He noted that Phindela said, "he was offered a bribe", and that he did not make any reference to corruption. Hhlophe then said that Tyawa’s evidence is in conflict with Phindela’s.

On Friday, Bongo was met by several young Cosas and ANC supporters who travelled from his home province of Mpumalanga to support him.

ANC MP Tandi Mahambehlala said: "We believe on the presumption that says not guilty until proven guilty by the court to law and we appreciate the fact that the state has given him the opportunity to prove his innocence.

The state is expected to conclude its case on Monday.