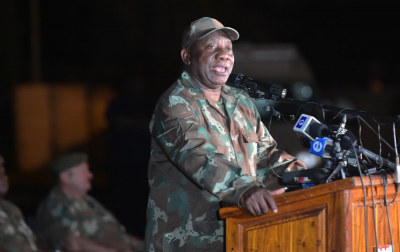 South Africa is celebrating Armed Forces Day on Sunday, to commemorate the tragic sinking of the SS Mendi steamship on this day in 1917.

President Cyril Ramaphosa, who is also the South African National Defence Force (SANDF) commander-in-chief, will officiate the proceedings, to be held at the Caste of Good Hope in Cape Town.

Armed Forces Day is an annual celebration, to commemorate one of the country’s worst World War I tragedies.

When the SS Mendi steamship sank in 1917, 616 black South Africa troops died. The ship was on its way to France.

Armed Forces Day is also to expand the public’s understanding of the military’s role and its purpose to society, and to demonstrate combat readiness.

However, due to Covid-19, the event’s usual activities, including a parade, will not take place.

Instead, a wreath laying ceremony will take place at the Mendi Memorial, and the South African Air Force will do a flypast, before Ramaphosa delivers his keynote address, the Presidency said on Sunday.

Armed Forces Day last year took place in Polokwane, a few weeks before the outbreak of Covid-19 in South Africa.

Ramaphosa took the opportunity to honour members of the SANDF, thanking them for their service in "confront[ing] the virus."

"Through the invaluable work you have done – and continue to do – during this pandemic, you have demonstrated that the SANDF can be relied on in good times and in bad; in times of peace and times of war; in times of stability and prosperity, and in times of crisis.

"By virtue of your calling and allegiance to the Constitution you acted when your country needed you most."

From mercy missions to repatriate citizens abroad who wanted to be reunited with their families to providing clean drinking water to vulnerable communities, the SANDF, South African Air Force and the South African Army Engineers Corps were thanked for their efforts in trying to curb Covid-19.

"[W[hat perhaps touched us as the nation most was the sight of SANDF members helping the elderly carry their groceries, walking alongside young people making their way home, and many other instances that showed our armed forces at their best," Ramaphosa said.

You are not just armed forces that exist to defend our nation; you are foremost forces of development and progress. We salute the soldiers who have succumbed to COVID-19; they are heroes who died in the line of duty.

"We owe them a debt of gratitude and convey our deepest condolences to their loved ones.

"We honour these men and women in uniform who continue to put their lives on the line to defend our nation and to contribute to peacekeeping and peacebuilding on our continent.

"Men and women of the SANDF, we thank you for the work you have done to protect our country at this most difficult of times, where you spared neither strength nor courage.

"On this National Armed Forces Day all the people of South Africa wish you well."

Message by President @CyrilRamaphosa, Commander-In-Chief of the South African National Defence Force, on the occasion of Armed Forces Day https://t.co/jHX5tkcfRb

The SS Mendi sank after colliding with the SS Darro, a large cargo steamship, in heavy fog off the Isle of Wight in the English Channel. The ship sank in just 20 minutes during the First World War.

Today marks 104 years since those brave soldiers met their demise in the line of duty.

While the ship was sinking, reports received later found that a death drill was instigated by Reverend Isaac Wauchope, in which he called on the men to "die like warriors".

These heroic efforts later resulted in the country’s highest medal of valour, the Order of Mendi.

Tweet
More in this category: « Presidency welcomes DA withdrawal of court application over government’s vaccine plan. Cele defends trip to Nkandla while Zuma says there still plenty tea for those who want to visit. »
back to top