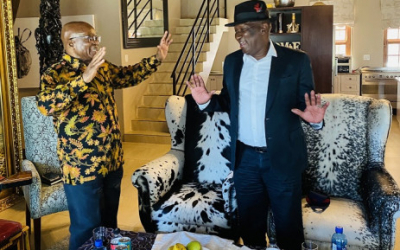 Former president Jacob Zuma says there is still plenty of tea available for those who wanted to visit his Nkandla homestead.

This as a long list of high profile politicians have in the past weeks visited Zuma. Among the most recent visitors was police minister Bheki Cele, and the ANC's top six was expected to descend on the northern KwaZulu-Natal town this week.

"The tea is still there to be used by those who come to Nkandla," he said, speaking during a virtual umrhabulo session under the theme "Social cohesion and the national question".

Before his address — as organisers of the meeting resolved last minute logistics — some who logged in could not help but greet and send kind words to Zuma.

Nxamalala, it is so good to be able to to hear from you, the real president," said an Mpumalanga delegate.

A cheerful Zuma responded with his iconic laugh.

Introducing the guest speakers, meeting convener Jeff Radebe said Zuma was a man who needed no introduction. As he briefly mentioned his contribution to the ANC, including that he spent 10 years on Robben Island as well as 40 years serving in executive positions of the party.

Giving his address, Zuma said he had prepared a lengthy paper which could not be dealt with during the stipulated time, but that he would make it available to the public.

He took a swipe at parliament, saying it was destructive and not contributing to nation building.

Meanwhile Police Minister Bheki Cele said he was ready to account to Parliament over his visit to Zuma.

Cele met Zuma on Thursday, but did not clearly explain what was discussed, except to say he wanted to understand the former president’s concerns to avoid what he called "a disastrous situation" however he said it was necessary considering the current developments in the country.

The meeting took place against the backdrop of a legal wrangle over Zuma’s refusal to appear before the state capture commission.

The Democratic Alliance (DA) said Cele must explain whether he visited Zuma in Nkandla in his capacity as police minister or as an African National Congress (ANC) national executive committee member.

Cele arrived at the former president’s homestead in a convoy of luxury German vehicles.

The DA ’s Natasha Mazzone said should it be found that he was there as an ANC member, that would constitute a pure abuse of state resources and the minister must explain himself.

Tweet
More in this category: « Ramaphosa commemorate those who lost their lives when the SS Mendi sank. Jacob Zuma condemns South Africa's laws being too lenient. »
back to top