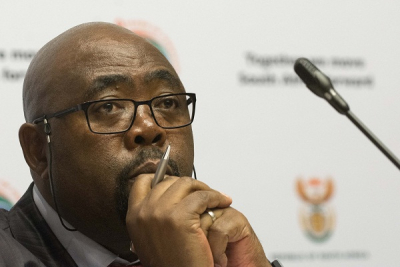 Employment and Labour minister Thulas Nxesi has reiterated that the adjustment of the National Minimum Wage rate was the outcome of an extensive consultation process.

The minister on Monday made the comment in response to the outcry on the newly adjusted National Minimum Wage (NMW) rates.

The department last week announced that the NMW increased to R21.69 per hour from R20.76 from March.

The minimum wage is a tool to ensure that vulnerable workers do not fall below the poverty line and it is designed to reduce inequality and huge disparities in income in the national labour market.

"As we have pointed out before, the minimum wage is really what it says it is. But it is not based on thumb-suck but a well thought out process that allows all the interested parties to have a voice.

I have noted with concern the objections from some stakeholders on the adjustment of the NMW and recognise the reality that the COVID-19 pandemic has had a harsh impact on most employers,” said the minister.

Nxesi said the NMW Act however accordingly permits employers that are genuinely unable to pay the proposed adjustment to utilise the exemptions procedures in order to be exempted from the NMW.

In amending the minimum wage this year, the department said the minister had considered all legal requirements, the report of the commission as well as different inputs from stakeholders.

This, reads the statement, was based on these and the results of the initial research undertaken on the impact of the introduction of the national minimum wage.

With regards to the inputs received in response to the notice published by the NMW Commission on its recommendations, stakeholders were divided in their recommendations.

Some supported the recommended adjustments, arguing for an above inflation increase as well as immediate equalisation of the domestic and worker sectors.

"Indeed some stakeholders were against the recommended adjustment based on impact that it will have on employment/ unemployment, low economic growth, the impact that COVID-19 has had on the operations of businesses as well as the high production costs for farmers who will have to bear the brunt of the increase," said Nxesi.

Research conducted by the Development Policy Research Unit (DPRU) at the University of Cape Town and the University of Johannesburg’s Centre for Social Development in Africa (CSDA), found that there has been no negative impact on employment as a result of the introduction of the national minimum wage.

However, they said the reason for that could be due to employers already adjusting almost two years prior to implementation.

Also, research found that the introduction of the national minimum wage led to a statistically significant increase but smaller than expected improvement in wages for the workers it covers and generally there was broad compliance in agriculture, with slightly lower levels in domestic work. Unfortunately, employees considered that the minimum wage for farm and domestic workers was too low.

The domestic worker sector on the other hand, judging by the findings of the Quarterly Labour Force Survey was severely impacted by the initial levels of lockdown and therefore the recommendation was to increase the minimum wage to 88% of the national minimum wage which translates to R19.09 per hour as of 1 March 2021," said the minister.