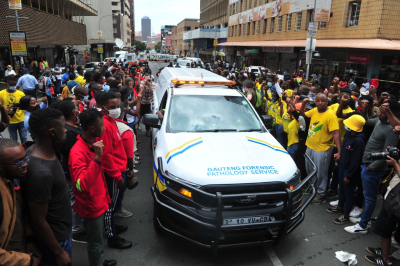 The four police officers accused of the death of a bystander during student protests at Wits University in Braamfontein last week will remain in custody after the case was postponed for a formal bail application.

The case has been postponed to 24 March and the officers will be detained at the Hillbrow police station.

The Independent Police Investigative Directorate (Ipid) confirmed in a statement that the officers are from the Public Order Policing Unit.

The suspects were arrested on Monday in connection with the death of bystander Mthokozisi Ntumba, who was killed, allegedly when the officers fired rubber bullets during the Wits protests.

Ntumba had just come out of a doctor’s consulting rooms as seen in an edited CCTV footage of the incident which was shared on social media. It showed the 35 year old running away as a police Nyala pulled up and a number of officers disembarked with their firearms drawn.

Meanwhile, the memorial service for Ntumba took place on Wednesday hosted by the city of Tshwane.

Ntumba worked as a human settlements planner and had recently obtained a masters degree. He leaves behind a wife and four children – the youngest of whom is less than a year old.

Twitter
More in this category: « Eskom moves load shedding to stage 2 from 9pm as demand spikes. Watch: Coronation of King Goodwill Zwelithini in 1971. »
back to top