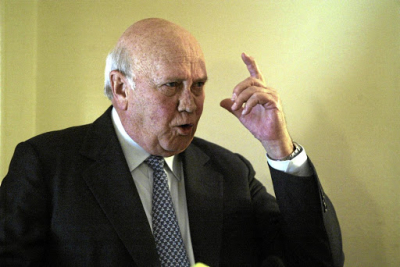 Former president FW de Klerk has been diagnosed with cancer.

In a statement, the FW de Klerk Foundation said: "Former President FW de Klerk announced at his 85th birthday that he has been diagnosed with mesothelioma, which is a cancer that affects the tissue that lines the lungs.

"Mr De Klerk will start a course of immunotherapy next week. There is no immediate threat and we are confident that the treatment will be successful."

According to WebMD, mesothelioma is cancer of the mesothelium, a membrane that lines the inside of the body’s cavities, such as the abdomen or chest. The main risk factor for mesothelioma is working with asbestos.

"The average life expectancy is 18 – 31 months after diagnosis, but prognosis may improve with treatment. Symptoms can include chest pain, shortness of breath and general fatigue," the site reads.

While the Nobel Peace Prize winner was in the spotlight in the early 1990s during apartheid, his son famously rocked the boat with a relationship with Erica Adams, which was described as being "across the colour line" during the apartheid years.

His late mother Marike was reportedly against the relationship. She was murdered in her flat in Cape Town in 2001.