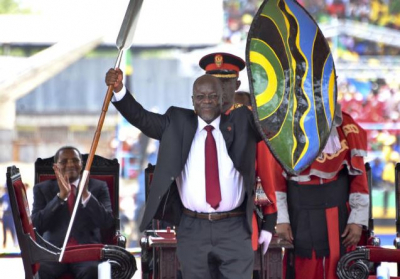 Condolences poured in following the announcement of the death of Tanzania’s President John Magufuli, while an opposition leader called for the immediate swearing in of his deputy to avoid a constitutional vacuum after two weeks of uncertainty around the health of the country’s leadership.

Vice President Samia Suluhu Hassan addressed the nation on state television late on Wednesday, saying Magufuli had died from the heart disease that had plagued him for a decade. She said burial arrangements were under way for the 61-year-old leader but did not indicate when she would be sworn in.

In a tweet on Friday morning, confirmed by the presidency, government spokesman Hassan Abbasi said Vice President Hassan, 61, will be sworn in at 10 a.m. local time (0700 GMT) on Friday.

"The constitution doesn’t allow a vacuum, once it was official that the president has died, the next step was for the vice president to be sworn in."

According to Tanzania’s Constitution, Vice President Hassan, 61, should assume the presidency for the remainder of the five-year term that Magufuli began serving last year after winning a second term. She would be the East African nation’s first female president and the only female currently holding executive power in the region.

Magufuli had not been seen in public since Feb. 27, sparking rumours he had contracted COVID-19. On March 12, officials denied he had fallen ill and on Monday the vice president urged Tanzanians not to listen to rumours from outside the country, saying it was normal for a person to be checked for the flu or fever.

Nicknamed "The Bulldozer" because of his reputation for pushing through policies despite opposition, Magufuli drew international criticism for his unorthodox and increasingly authoritarian tactics.

"The United States remains committed to continuing to support Tanzanians as they advocate for respect for human rights and fundamental freedoms and work to combat the COVID-19 pandemic, "the United States State Department said in a statement.

Although Hassan, the vice president, publicly championed Magufuli’s leadership style and frequently represented him abroad, she has been more soft spoken, less confrontational and more available for media interviews than the president.

Magufuli was a vocal COVID-19 sceptic who urged Tanzanians to shun mask-wearing and denounced vaccines as a Western conspiracy, frustrating the World Health Organization.

Tanzania stopped reporting coronavirus data in May last year when it had reported 509 cases and 21 deaths.

Twitter
More in this category: « FW de Klerk diagnosed with cancer on his 85th birthday. Livestream:State Capture Commission to hear testimony from Lynn Brown, Suzanne Daniels. »
back to top