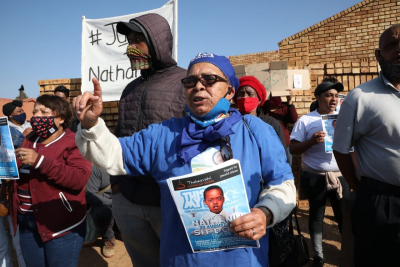 The Nathaniel Julies murder case has been postponed by the High Court in Johannesburg.

The three police officers accused of shooting and killing Nateniël Julies briefly appeared at the Johannesburg High Court for a pre-trial conference on Friday.

The matter has been postponed to 22 April for the disclosure of the docket.

Julies family spokesperson Catilen Pretorius is disappointed by the postponement.

"Attorneys for the defense have consistently being delaying."

"For us right now, we expect the justice system to come to the party. They need to do what they have to do to ensure those responsible for the death of Nateniël Julies are brought to book."

The 16-year-old’s death sparked violent protests in the area with residents demanding an end to police brutality.

The trio faces four charges, which include murder.

Twitter
More in this category: « NW Education Department ordered to provide infrastructure plan. Prosecutors accuses the NPA of racism and discrimination. »
back to top