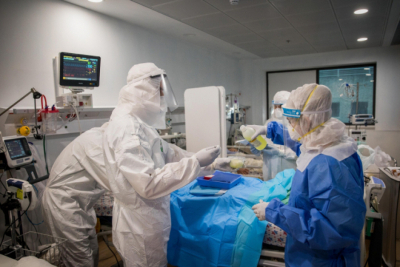 Health Minister, Dr Zweli Mkhize, announced that 182 983 healthcare workers have been vaccinated since the country kicked off its vaccine roll out plan last month.

Mkhize explained that some provinces have undertaken data verification processes backdated to December last year and during this process, additional data has been captured and recorded.

The World Health Organization reported that more than 120 million cases of Covid-19 and more than 2 million deaths have been recorded globally.

WHO said vaccination remains a critical tool to help prevent further illness and death and to control the pandemic.

Meanwhile South Africa’s finance minister said that a third wave of the coronavirus could destabilise the government’s efforts to control its finances and avoid a further downgrade of the country’s sovereign rating.

Two of the top three rating agencies - Moody’s and Fitch - downgraded South Africa’s sovereign rating further into junk in November on concerns of rising debt levels and the government’s ability to raise revenues and pay off debt amid the economic shock inflicted by the pandemic.

Tito Mboweni, replying to questions in a virtual parliament session, said the rating agencies would be looking closely at how the government was moving on its promised structural reforms such as infrastructure growth, telecom spectrum allocation, reliable power supply and reducing the public sector wage bill.

"If it (reform) was seen to be deviating from our fiscal framework, then we’re going to be in trouble," Mboweni said, and warned that a third wave of coronavirus could hurt the efforts.

"I’m scared that the third wave is coming... It’s going to be more vicious than the second one," he said.

He said any third wave would have to be handled so that the country could still keep the economy going, or else it could hurt its fiscal framework.

Africa’s most industrialised country saw a first wave of coronavirus when it was already in recession. It had to impose two hard lockdowns to curb the spread of infections, setting the economy back by 13 years and pushing millions more into unemployment at a time when almost a third of the population was already jobless.

The finance minister said the country’s floating exchange rate, low and stable inflation and a well-regulated financial market were positive factors that could lend support in the event of another crisis.