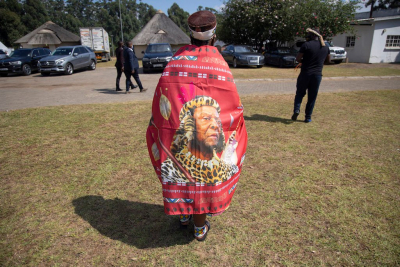 Queen Mantfombi MaDlamini Zulu has been announced as the interim ruler of the Zulu nation pending the installation of a new king to succeed the late Zulu King Goodwill Zwelithini KabhekuZulu.

King Zwelithini, 72, passed away in the early hours of Friday morning, 12 March, following his admission to hospital in February to deal with his diabetes.

This is until the queen decides who will take over as Zulu monarch.

The sister of King Mswati the third, Queen MaDlamini married King Zwelithini in 1971.

However Prince Misuzulu is likely to be the next Zulu king after a will read out to the royal family on Friday revealed that the late King Goodwill Zwelithini wanted his successor to come from the palace of the great wife, Queen Mantfombi Dlamini.

The will was read at a private family meeting that controversially excluded Prince Mangosuthu Buthelezi, the kingdom's prime minister and the late king's cousin.

King Zwelithini was born on 14 July 1948 at Nongoma in KwaZulu-Natal. He was the eldest son of King Cyprian Bhekuzulu and his second wife, Queen Thomo.

He has six wives and 28 children.