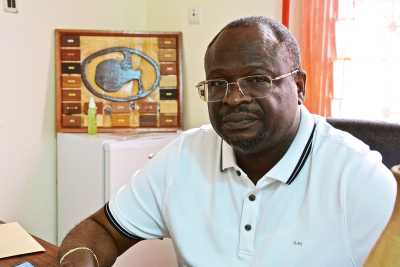 Those were the last words of Congolese opposition leader Guy-Brice Parfait Kolelas to his compatriots while battling covid-19 complications.

The main rival of President Denis Sassou Nguesso in Sunday’s presidential election, died in a medical plane enroute to France.

Campaign manager, Rodrigue Mayanda told AFP that the deceased was in the lead in many localities, adding that ''we will continue to count the ballot''.

The opponent had tested positive for Covid-19 on Friday afternoon. Kolelas was unable to hold his last campaign meeting in Brazzaville, the Congolese political capital.

A few hours before the election, the 60-year old posted a video in which he claimed "to fight against death".

A historic opponent, Kolelas, emerged this year as the only real rival of the outgoing president Sasssou Nguesso, 77. After 36 years in power, the latter did not hide his desire to be re-elected in the first round of polls Sunday. Election results are not expected until several days.

Kolelas placed second to Sassou N’Guesso in the country's 2016 presidential election with about 15% of the vote. The opposition figure has been particularly critical of the incumbent leader in recent days, declaring that Republic of Congo had become "a police state."

Sassou N’Guesso is the third-longest serving president in Africa, ruling from 1979-1992 and then again since 1997 in this nation often overshadowed by its vast neighbor Congo.

Republic of Congo has had fewer than 10,000 confirmed cases of COVID-19 since the pandemic began, with 134 confirmed deaths.

Twitter
More in this category: « Ramaphosa| We are making our electricity system more efficient and competitive. Livestream: Lynne Brown back at the state capture inquiry. »
back to top